You may have had a sneak preview of this last week when I started it and accidentally clicked 'publish'. Its been showing up in Google reader.(Be warned..even deleted posts will come to haunt you so don't write rude things and then think its been deleted without trace)

After the scary 'King Kong' creepy crawlies mentioned in the previous post I thought I'd share this with you. 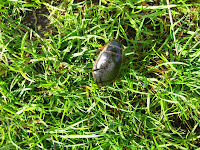 I wonder what it is? I've never seen such a big beetle in the North before. It was about two inches long,
Willow trod on it by accident but it continued on its beetly path. 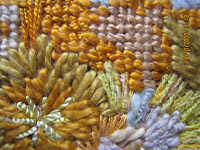 I used the 'holes' to do free stitching with textured threads. 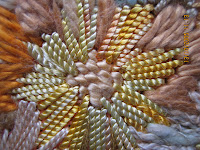 I must say I enjoyed it.
But its a bit of a distant memory now. 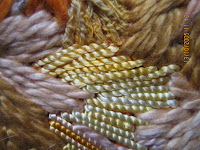 I know these awards go round and round.


I have received this one again from Beate 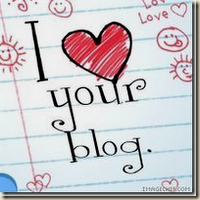 I told her I'd already had it so she took me off the list, but I decided I would accept it as a way of linking to other blogs you can read.
You have to award it to 6 (or is it 7) other blogs and link back to the one you got it from..so it increases readership. Good idea.
I've been reading Carols blog for ages and its always full of lovely stuff she's been working on.
Heloise has a nice colourful blog.
One of my favourite reads in the blogosphere is Ethel and Edna's Tearoom. Its full of love and creativity.
Sesga Loves 1950s is another lovely read with lots of little dolls, Daisie Days is a family, sewing and babies blog ..a peep into a part of life I once had!
Kate at Beautiful Things has a good tale to tell, and I've laughed and cried reading her blog.
Lets go for no 7.
I adore Caroline Inckle's paintings and textiles. They have such a mystical quality, and always make me think of the Northern Lights which is very appropriate, as she lives in the far North of Scotland.
I hope you enjoy them as much as I have.
Posted by Jackie at 12:27

ooh, I love seeing photos of your canvas project! That's a passion of mine, and I must say, you do beautiful work...let us see when it's finished!

Thanks for the new blog suggestions!

I have spent the day making something very colourful, so your comment is very timely. Thank you very much for the award.

Can't wait to find enough time to check out all the new links to blog's. Thanks for those

Thankyou so much for saying lovely things about me!
You've made my day : )
Cx

The canvas project looks fabulous! You always have the best blog links...

Very pretty stitching, and I too watched King Kong last week and it frightened the bejeezers out of me! I prefer your beast any day :)

I much prefer looking at your lovely stitched canvas work!

Oh I think your beetle may well be a cockroach, especially if it is about 2 inches long. It looks like some of the roaches we get in the Australian bush.

EEeek! There'd be lots of shrieking from the little girls if we'd found that one, I can tell you!!

Gorgeous stitching, and yes...now I'm haunted by thoughts of all those things I wanted to say, then didn't, so deleted them...or so I thought, eh?!!

Beautiful stitchery by the way. Such patience!!

Thank you, thank you for your kind words! I really, really appreciate them. Especially as I just broke my favourite mug (I hate that), so "I'm happy again" as Lexie would say. xx
P.S Always love your stitching, but there's something about those handstitches isn't there...oh the nostalgia! xx

I think your beetle might be a water beetle - it is very like the great diving beetle. Love your work, by the way. I came via Marylin's Creative Wabbit.