..since I posted.
I've been having a nice time.

I had a brilliant time at Yarndale.
This is my new sign at last. 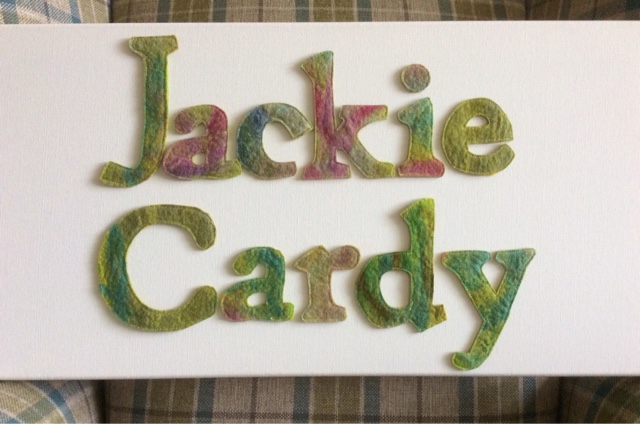 I wasn't expecting it to be such fun as it was the third time I'd done it and I thought perhaps it might be good to have a break, but it was sooo good I can't wait for next year!
Blurry photo of my pen. 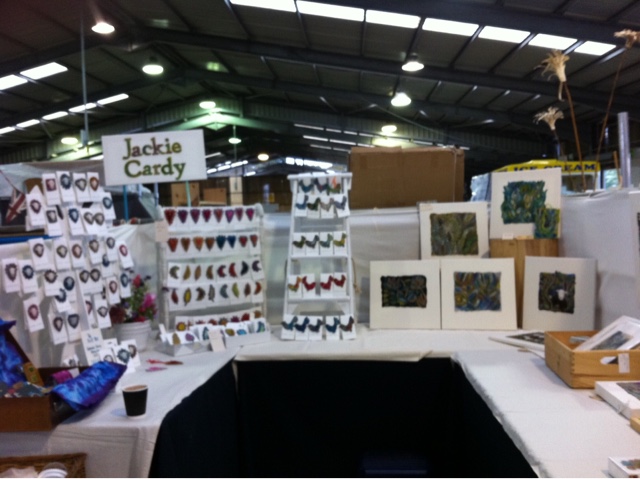 I met loads of lovely people , some of whom had signed up for my course in September which has been and gone, and some of whom were interested in signing up for my second course which is in November (I still have a couple of spaces left due to having to change dates) .The alpacas had a lot of compliments too. Vivian the baby was a big draw with her spotty face. 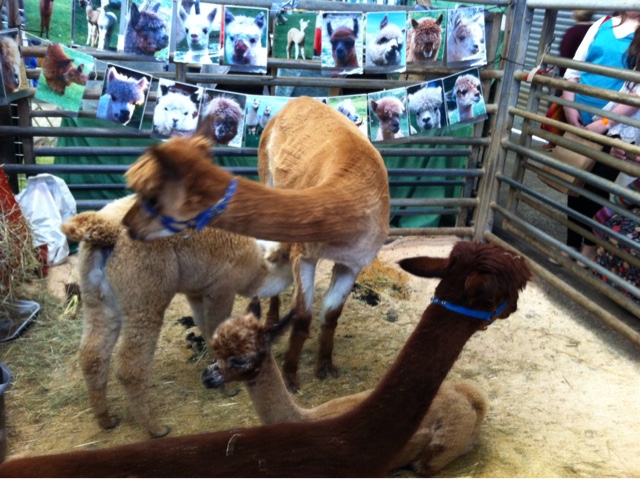 A grand time was had by all. Apparently , if you were walking about on the Saturday it was heaving, but I was in my little pen and enjoying chatting to people and selling pieces of work so I loved it. It's so wonderful to be complemented all day long.
These giant sheep were walking about all day as well. 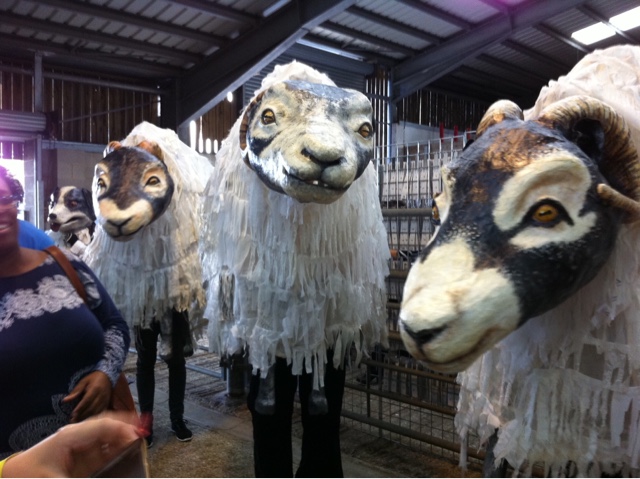 On Friday 14h October it was my Lovely Mum's 89th Birthday. 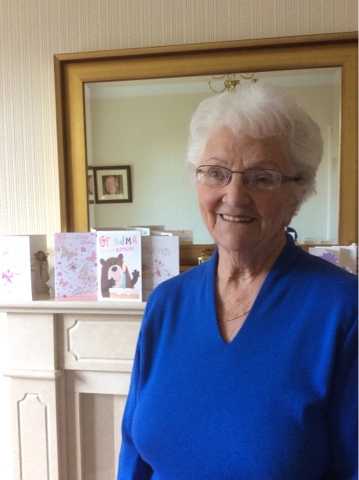 We had a plan. Hetty went to a friend's house. We would go for lunch to a pub we'd seen in Far Sawrey (Near the Windermere ferry) called 'The Cuckoo Brow Inn' and then go to Kendal and pop into the Abbott Hall Art Gallery to see 'Winifred Nicholson in Cumbria' . My husband had restored a lot of her paintings for a book by Christopher Andrae which was published a few years ago. 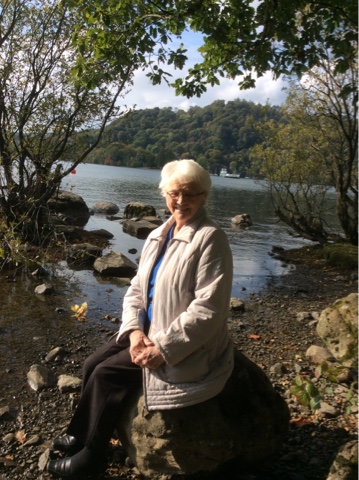 Don't you love teh lake District? Lovely sights like this.
Swallows and Amazons on Windermere. 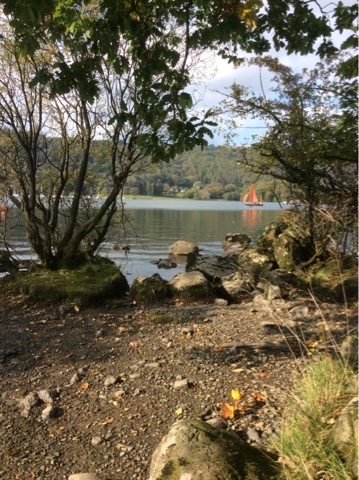 The meal at the pub was delightful , 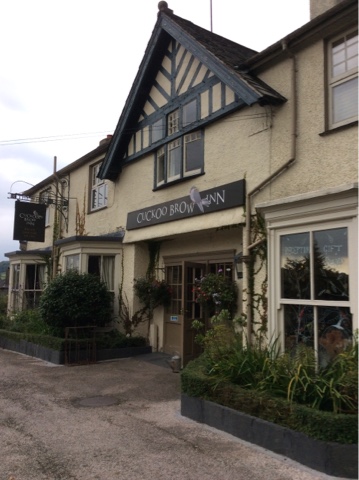 Then we set off to Kendal but unfortunately the traffic from the North to the South of Kendal on a Friday afternoon is a nightmare and by the time we got to the Gallery it was too late to go in.

So in the end Brian went on his own the day after , as it was the final day.
Shortly after that, an invitation arrived in the post for guess what? The preview of the Winifred Nicholson in Cumbria Exhibition in London!

The day Brian was hobnobbing with Winifred, I was having a fab time with a wonderful group of ladies teaching the first course I'd organised myself and I have to say it was brilliant fun.
They were a terrific group and we laughed a lot and they made some beautiful felt, and made a good start on the embroidery. 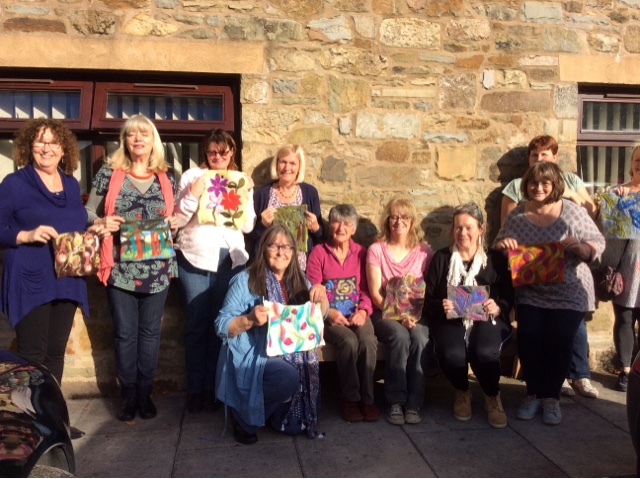 Some came from so far away they had to stay in hotels. I was very honoured.
I'm doing it all over again in three weeks with a different group.Still a couple of places left due to ..well circumstances!

The work on the roof still grinds on. I'm going to miss the lovely roofer and his assistant when he leaves (eventually). Last week his Father (a retired GP)turned up on a motorbike and his brother (a tiler) arrived to throw some rubbish in our skip (by prior arrangement) so we had three members of his family at our kitchen table. I'm beginning to think he's a member of my family! I'll be so glad when I can see through the windows again and walk into the garden without clonking my head on the scaffolding, and pay some attention to what we used to call the lawn. We need an industrial vacuum cleaner to clean out the loft . The skylight has been covered with a layer of thick grit and bits of old slate and new roofing felt so it's gloomy on the landing as thats the only natural light.

Brian is painting the woodwork so all is going to be very smart. e might even finish with a flourish and re-instate the Balls on the gateposts which regular readers might remember were lifted a few years ago but then recovered. 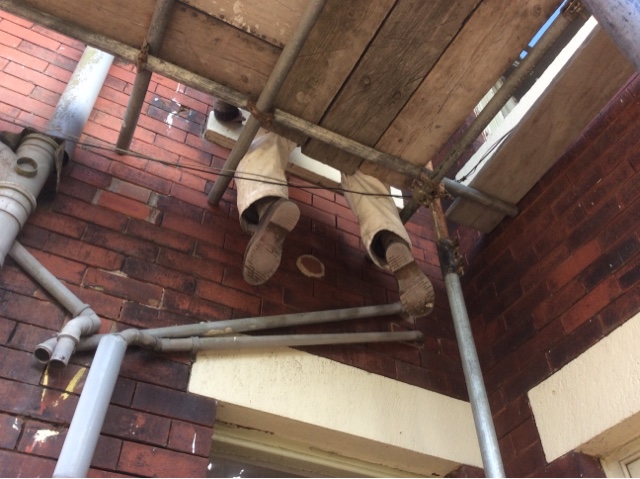 This weekend I'm teaching a workshop at Creative Threads in Garstang.
I was convinced I'd be exhausted on Sunday when the clocks went 'back' but then I realised it's 'forward' so I'm ecstatic.
Happy Winter everyone.