Its so gorgeous today I must make a record of it.
We had to get up early for a delivery and its amazing what you can get done when you get up early!
I am an owl. I love my bed except when I have to get into it. Getting out is a different matter. However at the ungodly hour of 7.30 am I was out of it.

Our two new kitchen worktops have arrived and are very heavy indeed. They are oak, replacing two pine ones which are past their best. We're having new taps and a new base cabinet to replace the one which has almost dissolved due to a dripping tap. Dripping and eventually running. And then guess what? My husband fixed it.
If he'd done it a year ago we could have saved the expense. And I love my antique taps. I don't really want new chrome ones but I suppose they'll work properly. I gave the copper and brass one last polish today for old times' sake while my husband coated the oak with some oil ready for installation on Thursday.
Anyway its a gorgeous day and we are sitting with the French windows open, with the sun pouring in and the birds singing, and the sound of the cricket match just up the road.
I've spent the afternoon gardening at the front. I thought I'd put these pictures to remind myself how nice it can look.
Its a good time when the clematis is in full bloom, and the azaleas are blazing. 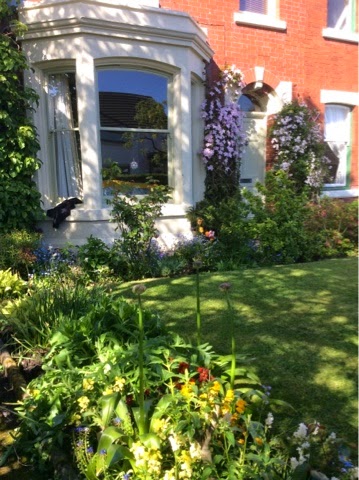 The window on the right is next doors.
The bush I couldn't identify last year I now know to euonymous.
Its getting a bit big for the front.
The garden is in a bit of shade at this time of day from the silver birch which probably needs a trim back. It makes the alliums a bit leggy.

Once a long time ago when I was imprisoned in a classroom, I was planning my escape and staring out of the window and saw a garden I loved, with tulips, forget-me-nots and wallflowers together, and after all these years I did it. 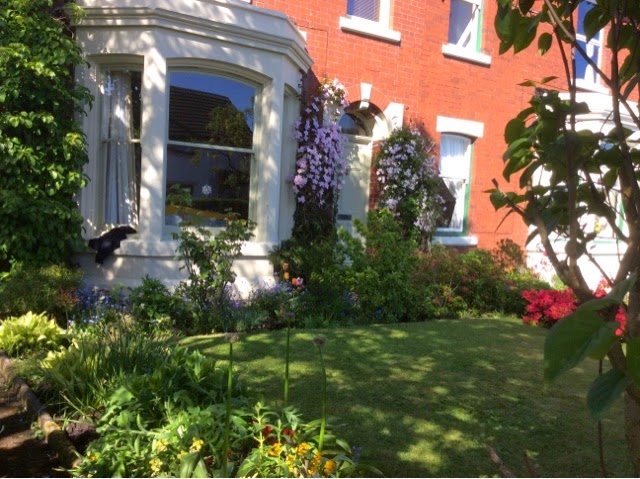 We have an area under the front hedge where nothing much grows and Brian was mowing and I said 'oh just treat it like grass until it becomes part of the lawn.' He didn't hear me and continued to do it anyway and turned to me and said 'We've got a ha-ha' 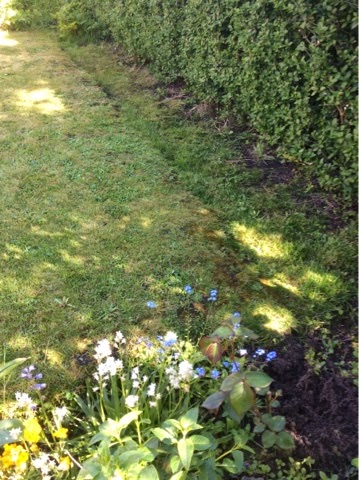 So talking of growing..I did this.
Makes me think of a clump of rushes by the river.
It was just a bit of a play with big bold shapes. I didn't like all of it so I cut the bits I did like. 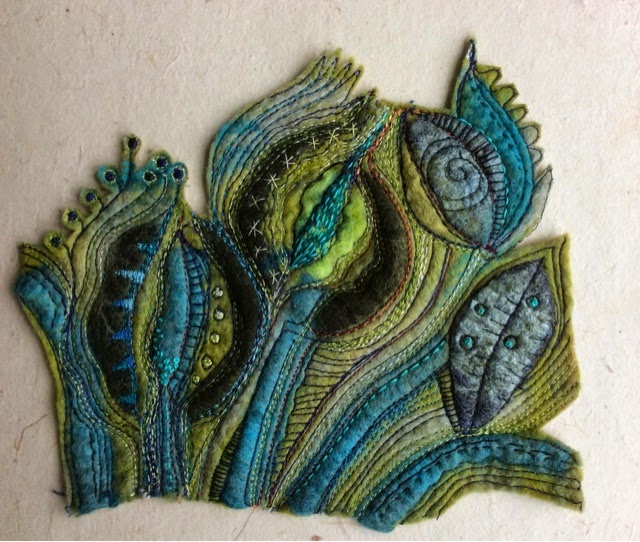 My sewing machine is in the hospital so hand stitch is all I can do. I have a number of prepared pieces ready for the needle!
I wish every day was as lovely as this.

This is rather early for me in May so you never know I MAY even do another. (see what I did there?)
Its because I have stuff to blog about although my photographs are now spread around various 'devices' and I'm not so good at syncing them so it gets more difficult.

We had an afternoon out on Bank Holiday Monday to Glasson Dock and saw this lovely sight on the Lancaster Canal. 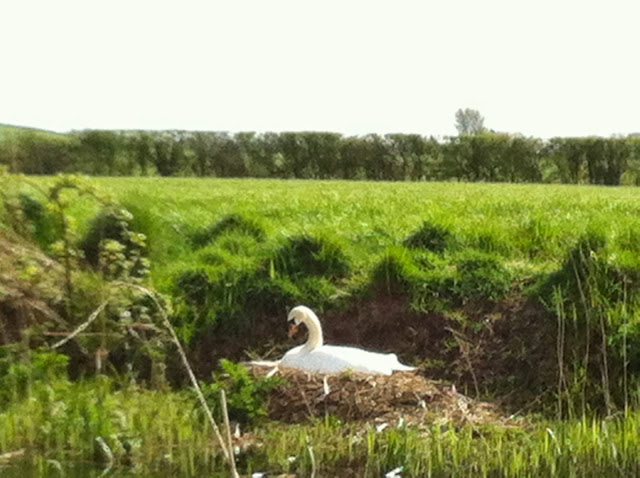 My big news is that I have made myself a lovely new website.
Squeeeeeeeel!
I am ridiculously excited about it.

I've waited for my web developer son to make me something beautiful for years but you know how the 'cobblers children have no shoes'  well the techie geeks mum has no website. UNTIL SHE MAKES IT HERSELF.. oh YES!

Well actually with the help of 'weebly' and I must say the techie geek has indeed done the complex stuff about linking the domain with the builder site, which consisted of 'pointing' things at other things. Well that baffled me but he did it for me in a matter of minutes.

So you can see a lot of my work in one place at jackiecardytextiles.com

Still, the website works and I do like it. I had visions of things like animated needles stitching onto the next page etc., but as it is, it does the job, clearly and concisely. I've linked to this blog on it but I would have liked to have the blog on the website. There is an option to write a blog but I'm rather fond of this one and don't want to move it.

Last weekend I had a stand at the newly relocated 'Art in the Garden'. If you search this blog for 'Art and Garden' you'll see how lovely it was and I did it for about 13 years. Two years ago it came to an end and I was quite ready for the break. Having to work hard for an event in Mid June meant I never really did any gardening at the most important time.

However it has been re-born in a garden quite a bit further away from me, and in May.  Last year I didn't do it. But when I went to look around everyone was saying how they missed me and I should do it so this year I did.

It was a wet wet saturday. It had been raining but the rain stopped. The ground was sodden. It was very cold and I wondered why was I bothering. I hardly sold anything on Saturday. However Sunday was nicer weather, more people came and in the end I didn't do badly. But the main thing is that I had a really fun weekend. Such a laugh with the people I was with in the marquee. People asked if it was the beer tent! They could hear us from a distance.
Here's Pam with Mika. 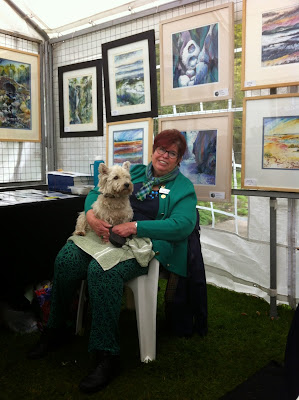 Our view from the tent. It must have been saturday as there are no people in it! 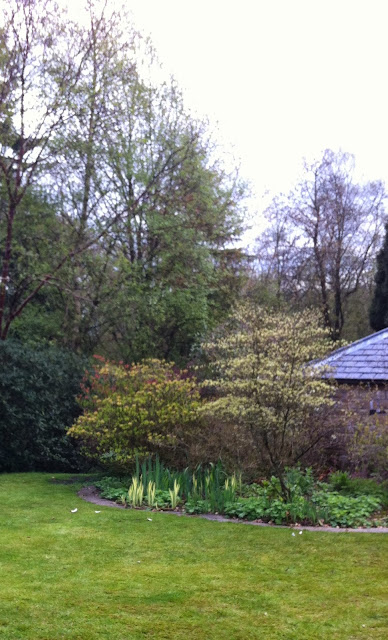 This stern chap is a first cast , from China, of a terra cotta warrior. He's well secured! 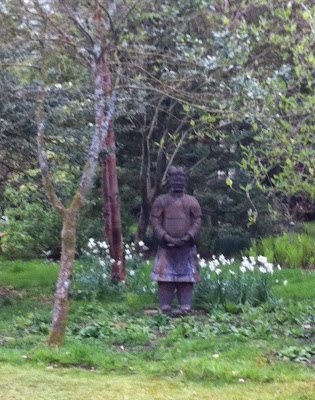 A view towards the tea and cake tent. (Gorgeous cake by the way, especially the Cow Ark Cake)
In the flowers is a beautiful ceramic globe by Amy Daniels who also had a stand there. 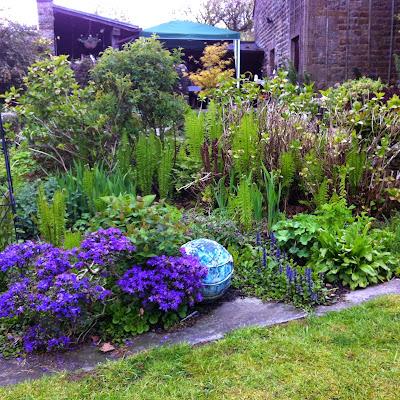 There were lovely little touches about here and there . My photos are from the phone so not as good as my camera. 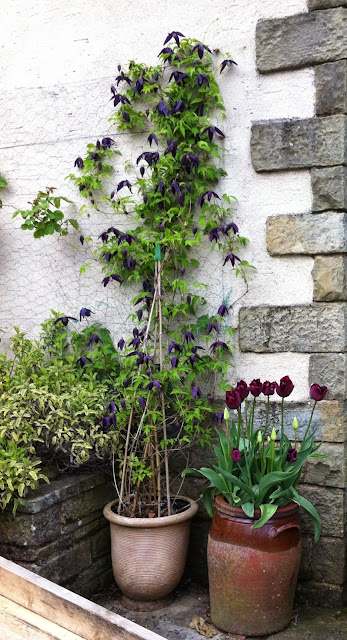 The garden is beautiful but the plants were late so it wasn't. as had been expected. in full flower. Some of the steeper areas had to be avoided due to the slippery ground. But still we had fun.


Now I'm working for Woolfest in Cockermouth on 26th and 27th June. ( Please note, Friday and Saturday, not Sunday) I'm so excited.
Its a big event.
I must work harder!

Oh by the way.....
In the last post you may have read about our trip to Grasmere.
We had parked in a 'Park with ease' carpark, where there is a number recognition camera. When you leave, you put your car number in and it tells you how much you have to pay. However we only had £3.69 and it was £3.70 so when we saw 'Pay Online' thats what we did.
I did it as soon as I got home.
But we couldn't find the amount so I had to choose £3.75, duly used paypal and forgot about it.

Then last week we had a letter to say we had to pay a £50 fine.
So I had to appeal. I was hopping mad.

The Assertiveness module of the NHS wellbeing workshop course came in handy.

I said I didn't expect to wait the usual 28 days for a reply as I had done nothing wrong.
I had a reply that night.
But its turns out I HAD done something wrong. I'd had the temerity to put in a o instead of a 0. An oh instead of a zero. So it hadn't recognised the number. But 'on this occasion' they would cancel the fine. Like we'd done it before.

So, do be careful if you have a circular character in your car number, choose the right one on a park with ease site.

More assertiveness happened yesterday. Our newish neighbours have been very drastic in their hedge trimming. We can now see right into their garden after having had 30 years of privacy. I worried about how to deal with it. My husband was saying we should put a big trellis up but then I didn't hink we should really have the expense.
Then I decided that I would be politely assertive, putting my point of view.
So I asked them if they'd pop round and when I showed them what its like for us now, it was agreed that it was not good. They are very nice people and fortunately we seem to be agreed now. So they are 'mulling it over' and she has promised to work out a solution.

That made me feel a lot better. Instead of getting all worked up and resentful I sorted it with new found assertiveness. Not bossiness. I probably spoiled it by telling her I'd been on an assertiveness course but hey..it worked.

In other news..Hetty had another op on her eyes to stop them watering. She had her tearducts flushed, but during this process they found more eyelashes inside her eyelids and removed them. F.O.C.
I asked what that meant..its free of charge. And our vets is not noted for its generosity. I even had to pay for the bit of bandage that holds the buster collar on! I wouldn't mind but we are building up a large collection of buster collars for dogs and cats. I never think to take one with me. 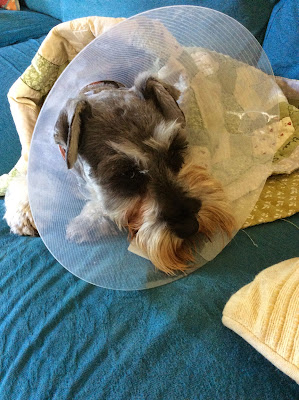 Now. Do you remember me talking about my African inspired piece for the Australian Magazine, 'Embellish'?
I thought they'd hated it. I was embarrassed because I didn't hear anything more from them.
Well its only the main picture on the bloomin' cover!!!
I'm thrilled to bits. Its out in June.
Once its out I think I'll be able to share a detailed picture on here. 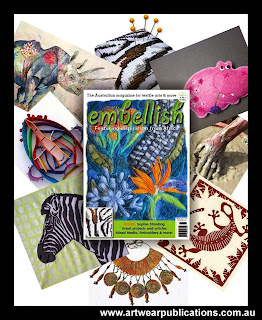 So there we are. As the self-esteem module of my wellbeing course said:
'Don't make assumptions'