We've been and are back again.
Did I fool you with my cleverly scheduled posts?
I know those with Google reader saw half of one at the wrong time so I'm not quite as clever as I thought I was.
I have been mentally composing blog posts about different aspects of holidaying in Greece, but I don't want to be an insufferable bore with my thousands of holiday snaps, so here's a summary for now.
Sunrise at Colonna Harbour in Rhodes 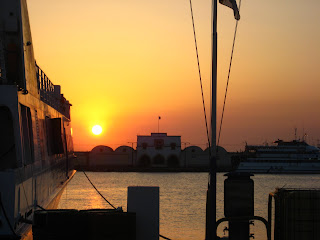 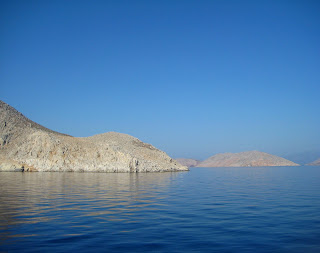 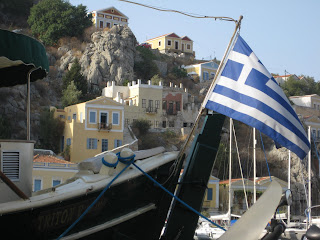 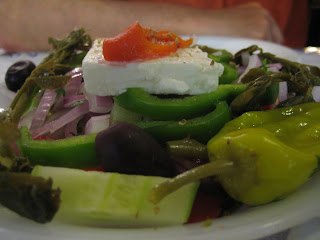 and Symi Shrimps deep fried in Olive Oil to be eaten tail shell and all. 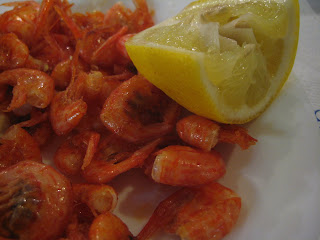 Picturesque beaches with tavernas, tamarisks trees and travellers on Donkeys, 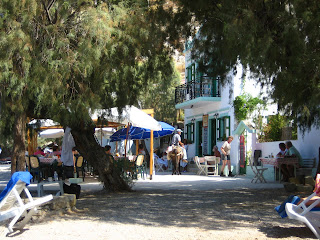 On a boat trip around the Island...I did something brave. 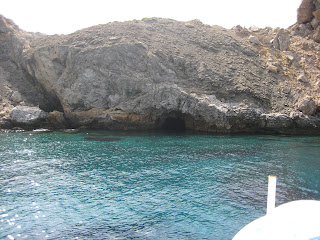 .
I swam right into this dark cave.

We sailed into spectacular coves feeling like Odysseus, would we meet the Cyclops or Circe?
I certainly felt as if I had been a Lotus eater 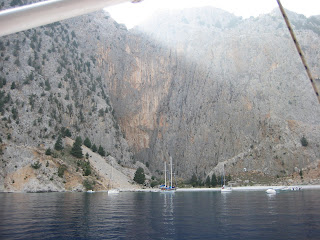 and didn't want to leave.

An ever changing Symi 'still life' outside a house in our street there. Notice how the oil drum has been painted pink to match the house it belonged to. 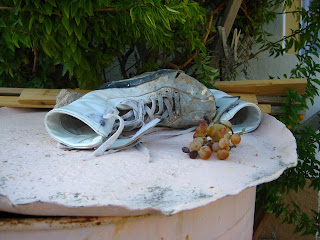 Finally a lesson on how not to pack.
I took this as I emptied my extremely heavy suitcase. 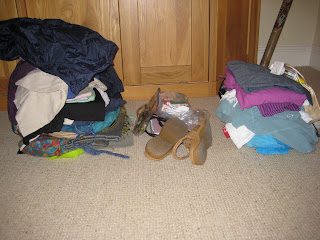 I have returned to lots and lots of comments and I usually try to answer everyone but I know I won't manage it so I'll say thank you here.
My Google reader has over 400 unread items so I don't think I'll catch up there either.
My holiday has refreshed and recharged me. There may well be the occasional post about it in the future.
Can you bear it?
Its nice to travel and relax, but its good to be home.
Posted by Jackie at 23:02

Well it looks as though your holiday was in paradise! That lovely blue colour!

Welcome back Jackie!
These beautiful pictures really pull at my heart strings!
So happy that you had such a wonderful time!

Welcome back Jackie!
Your seems to have a wonderful vacation! So lovely pictures! I know you will create lovely things now

Woohoo! You're back. Nice to 'see' you and glad you had a fab time.

Welcome back - it all looks fabulous!

Welcome home. Those photos are beautiful. The food alone in enough to make we want to travel to Simi.

Welcome home. Those photos are beautiful. The food alone in enough to make we want to travel to Simi.

Welcome home Jackie! It's good to have you back, but those photos are gorgeous, so I'm sure you had a wonderful time. x

Oh, that looks so beautiful! I always over pack!! Glad you had a nice time and I'm glad you're back. I want to hear and see all about it!

hey welcome back, to hell with catching up, stay relaxed.

Looks so lovely and warm. I'm off for a sort of surprise holiday in Crete next month; now I can hardly wait!

I did'nt like you being away because I missed you very, very much but I will let you off seeing that you had a good time. Glad you are recharged.

Thanks for comments about hotty totty!

So jealous, looks so beautiful and relaxing! Glad you had a great time

Welcome home Jackie, glad you had a lovely holiday.

Thanks for the comment on my blog - but I don't think grey cold Wales is in quite the same league as the Greek Islands ...

Your holiday looked wonderful, glad you had a great time. x

Welcome back Jackie! Loved seeing your holiday snaps...will make a mental note to add the Greek Islands to my 'must visit' list.
Hope the holiday feeling is staying with you.

Oh you poor woman, you pack like I do! I hate coming home and finding out that not only could I have not taken all those things, I could have taken one less suitcase!

The photos are wonderful though. All that lovely blue makes me want to go there though the last thing I want is another hot place. Glad you're home though, Jackie. ;-))

I can definitely cope with seeing more! Your pictures brought back happy memories - I love that place.
Did you climb the steps?
Linda xx

I too love Harris Tweeds...I'm always looking for old jackets at the thrift stores which I then cut up for hooking rugs. I'll visit again.