..and now for something COMPLETELY different.

On a cold and wet Easter Saturday we set off over the moors to the little industrial town of Bacup, where, on the main road out the other side of town, nowhere in particular, we found what we were looking for.
A small band of rather unathletic looking men in strange costumes, in two rows along the road, bending forward with their hands cupped behond their ears.
A doleful queue of musicians walked between them playing their silver instruments , a repetitive uncomplicated tune and the dancing began. 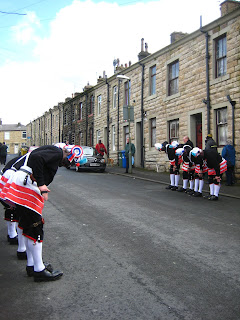 We, with a handful of other followers walked behind them . Cars continued to fly up and down the road and the serious dancers polka-ed along the road clicking the wooden discs on their waists, wrists and knees in a ritual that happens only every Easter Saturday, and only in this town.
After a carefully choreographed few miles, where the first lots of dancers overtook the band, then the band overtook them and the second team followed up, we came to a house with a bit of spare land in front. The big black bag with the garlands was passed round and the second dance, to a different and slightly jollier tune, began.
By this time there were a couple of dozen followers and now a film camera crew or two, and the safety stewards had their work cut out keeping everyone tucked in off the road. 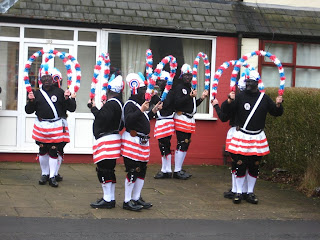 The strange procession moved on , stopping here and there to do the full dance.
Down cobbled streets of terraced houses and through a modern housing estate.
All the time, the band kept to their slow and steady striding pace and the 'Nutters' Danced on.
By the time we got to the fire station there was a large crowd of followers.
They danced right into the centre of town and in the pub, in the square, in the Social club and on. 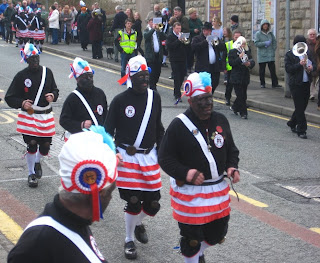 The Britannia Coconut Dancers.
Locally known as the Bacup Nutters. 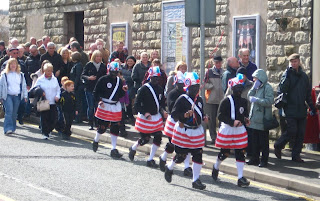 I first came to watch this in 1975. It was snowing then, but apart from that..it was exactly the same . (Oh I was thin then so not quite) 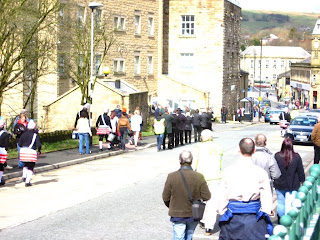 We came again around 1990 when our boys were young.
And if you look at you tube you will see the videos from all the other years are exactly the same as the one I was trying to upload but failed.
This is the one that tells the whole repetitive, solemn, mesmerising story of the day.


These are not Morris Men, nor are they 'Folkies' but men who have done it for years. (I overheard there was one in his 35th year)
There are no explanations. Even they don't know why they do it but they do it and everyone in Bacup knows they do it and is proud of it.
The black faces have no racial connotations but are a crude and readily available disguise.
This is tradition!
Makes me proud to be British!
(I think)
Posted by Jackie at 13:42

I was thinking that too - do you think she got side-tracked????

Aha! and to everyone reading the above comments: we could see the title but not the contents.

OH WOW! Jackie, what a fascinating post. You are right, soooo British! Thank you for showing us. :O)))))

Oh that's a relief, I thought Jackie had dozed off or something.
And as for the post - how bizarre! You wacky Northerners eh?

This is British quirkiness at its best Jackie. I feel proud too x

You should know by now Jackie, we hang on to your every waiting word....
Very bizarre..but wonderfully British. x

always proud to be British and especially proud to be a northener, even if we don't have chip and pin!

I was looking for something different to go and see this weekend and here it is..... ! LOL One of our very strange ancient traditions (I guess!)

Oh, I wish I'd known about then - must try to remember next year! Your felt pieces look delicious - good enough to eat (and I'm not even on a diet!)See you Friday?

Hear, Hear!! I love these old traditions which are carried on in various towns and villages. The Nutters must have stamina - a good way of keeping fit. I was not thin in 1975 - I was pregnant!

Really interesting post, Jackie! I watched the whole thing and then looked up clog dancing which 'probably started in the mills, when workers would tap their feet to the rhythm of the machines' according to Wikipedia. At least that's the footwear explained if nothing else. Bye for now, Lesley

Loved reading your post. We are fans of the Molly Dancers in Suffolk.
Makes you proud to be British doesn't it when we keep our history alive like this.

Such a fascinating event! And you're right, so very Brit!

Its this wonderful quirkiness that makes the British unique ... I hope we never lose these traditions.

Wonderful! Only in Britain.

So glad there is one British tradition that hasn't been ruined by 'ealth abd safety!!!

Oh my goodness. I din't know people still blacked up. Mad dogs and Englishmen and all that.

Fiona..I don't think there's a racial element in this 'blacking up'. If you check the website, its more to do with disguise and not being recognized, as well as mining connections.A kind of camouflage.