What a miserable day.
I spent most of it with the front door wide open waiting for the man from Hewlett Packard to come and collect my laptop, which is broken.
I arranged it yesterday with a man from Capetown who sent a message to a man in Warrington who had to send a message to a man in Birmingham to send a special box so the man from Warrington could collect my laptop. Which is broken. Which they are going to fix.
No-one came.
At 3pm I rang the man in Capetown who put me through to the man in Warrington who said they hadn't got the message.
Their computers were broken.
I shut the door. 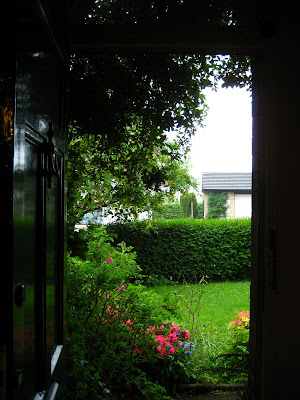 This is supposed to be a sewing blog so here's some sewing. On a miserable day last year I was experiencing a different kind of communication problem. The creative side of my brain was not communicating with any other part of my brain, so I decided to sit down at my machine and play. This is what happened, and I quite liked it. 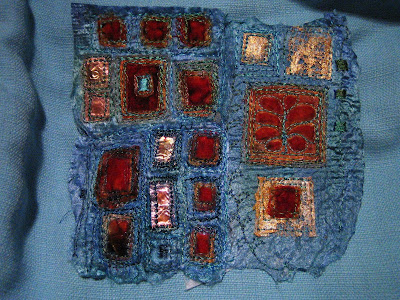 I played about with it for a while, chopping and changing and adding, and it became this. I put a picture of it on flickr and had lots of lovely comments and you can read about what happened next in the sidebar of this blog. Thank you flickr friends. 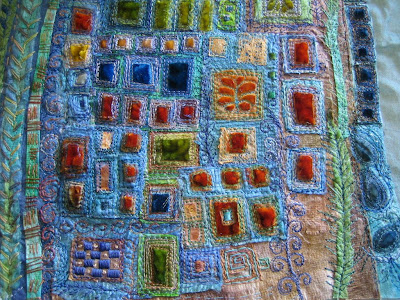 And thank you all my friends from blogland. I am learning that there are almost as many blogs in the blogiverse as there are stars in the sky. There are also a lot of stars in the blogiverse and I have only just started to discover them. And some of you have discovered me and taken the time to leave your generous comments. Which makes any day, miserable or otherwise, glorious.

Oh poor baby! Waiting and telephoning, and winding up no further along then when you started is certainly no picnic. I am sending you a big hug and lots of love from across the vast blogiverse. I am wishing you and your broken laptop a much better day tomorrow than the one that you had today!

I hate repair men. Love the view out your door though! Beautiful embroidery.

Jackie you definitely shine bright in the blogiverse sky!

You know how to tell a story and it make me smile thanx... I heard about those boxes that get sent to lock the laptop in its like a security guard.
fab view and stunning fabric art.
hope tomorrow is a better day.
thanx for sharing with us.
chriss x

You are definitely one of those stars Jackie. At least your weather didn't look quite as miserable as it was here. I think you need to get the machine out and have another 'play'. Maybe another award-winning masterpiece is brewing... :0)

I have just started reading your blog and love it. Sorry about the wait but you do have a beautiful view out you door.

Thanks for all your wonderful work. A great insperation.

I hope you have a better day today. I wish the miserable days I have with my creativity produce such stunning results! ps I like the view out the door too.

sorry they didn't turn up - I hate it when that happens. The Byzantium piece is glorious.

I am obsessed with arty blogs! There are a lot of them out there and plenty to cheer up a miserable day. Hope your day improves by the second!

Forgot to mention how much your beautiful "play" quilts made my day!

Hi Jackie,
Been admiring your work on Flickr for a long time. This piece is wonderful. Just found your blog. Look forward to reading more.

I thank whatever powers that be, that I married a computor geek;).

However, your horrid day spurred you on to produc some glory....and it is glorious.

Have they no comprehention of the personal loss and anxiety you are suffering from the short term loss of your laptop? Have they no understanding of misery they are inflicting upon your poor self??? There are no words bad enough for the likes of these so called Hewlett Packard Laptop arrangers and pickerupers! ;-)
By the way, so glad you had a miserable day last year...if you had'nt you would'nt have gone to your sewing machine and you would'nt have gone to Flickr and we might never have met!!! (purely in a cyberspace way, of course).

well this piece could make anyone's day. i hate waiting around. i always sew when i am waiting. sometime i forget what i was waiting around for. maybe we should all start a waiting around quilt, we would get quite far very quickly for sure....

I LOVE LOVE LOVE YOUR ART WORK ITS AMAZING !
LOVE FROM SESGA XX

ps I have added you to my favorite blog list is that okay ?

Repairmen....BAH!!! No fun waiting and being disappointed. I hope the laptop is back in order soon. Meantime, looking out your door looks heavenly to me.....so stand there and enjoy that picture as much as you can, knowing that we are all sending you good wishes! Pat at birdnestontheground

Oh, dear! Hope your 'man' came today cause waiting around just isn't fun. Post and then we 'dogdaisychains' fans will know what happened? The view from your door definitely deserves a piece of embroidery!

arg! That is really annoying! But the picture out to your garden is nice! I suppose if we are sewers, that wait time is a boon..*sometimes*..!

Beautiful... I love the colours and texture of your art.