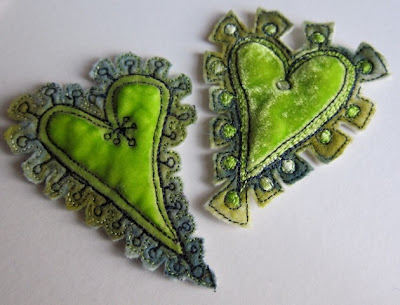 February is nearly here and for the first time ever I am actually going to have some luvverly hearts ready for the big day.
(I say 'the big day' but in our household it goes largely..in fact completely ..unnoticed.
Ah its a good job love is more than hearts and flowers isn't it?)
But for those who like a bit of romance, there are some heart brooches here. 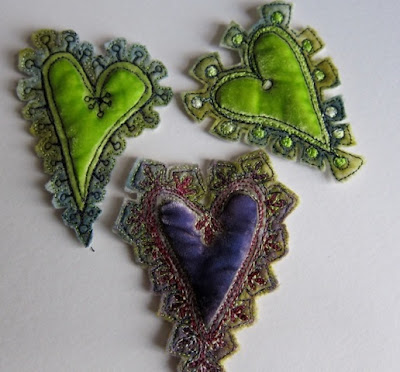 As with all my restarts, it takes a time to get going again. (I've made something else this year but thats under wraps as its a gift. I'll show it later.) Here's a first purple one..with whirly bits. 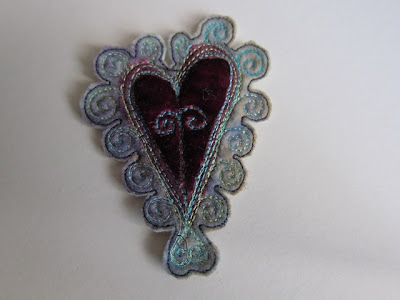 Talking of love....I love where I live. The North West of England.  My actual village is pretty wonderful for walks, but we are also in such a good spot for getting to other places! Less than an hours drive took us the village of Staveley near Kendal, where we had a walk along the river with Hetty and then a drink and a sticky bun in the dog friendly Wilf's cafe. Then a drive home via Arnside, which, by the time we arrived, was a picture glowing in the late afternoon sun. 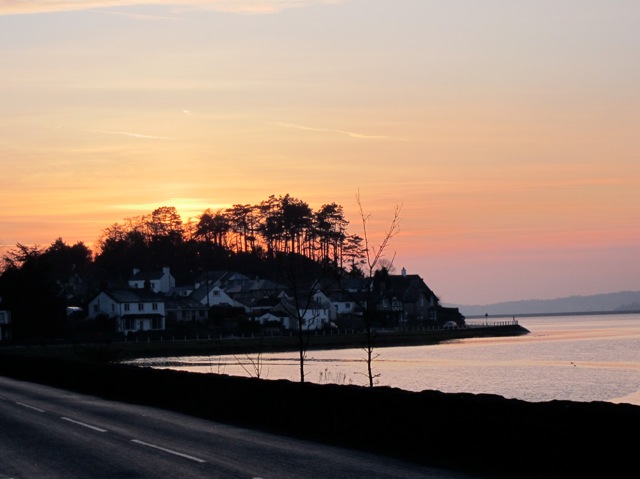 With the sea on our right we drove along the coast road looking for flocks of starlings (which we missed by 5 minutes) and watching the sun set over the bay.
Really lovely, and home in time for tea. 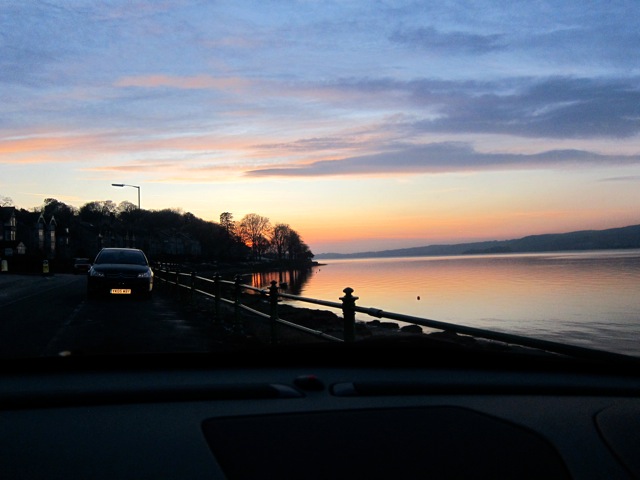 I was having a root through some old things that came from my in-laws- house. In a box I found this little wooden turned tube. 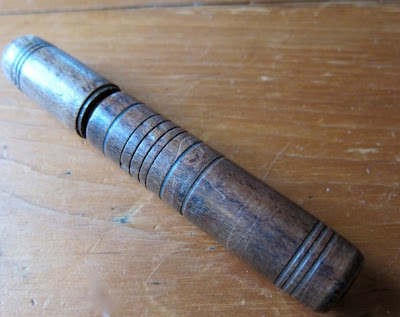 On unscrewing the top I discovered these. The one on the right is easy to identify, 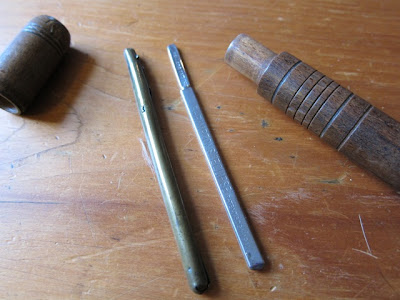 a vey fine crochet hook which sits inside its own handle. 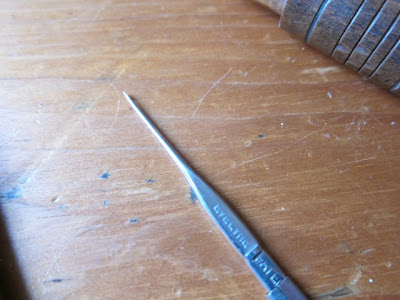 But the other thing took a bit of experimentation to work out what it is. There is a large tube, with a shorter tube and it contains three small crochet hooks, with a sort of pin head on each one. 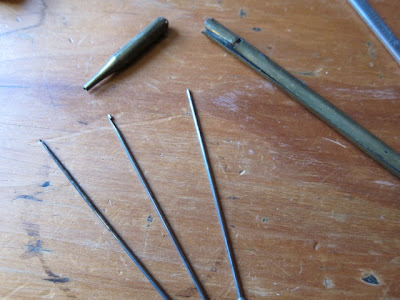 After fiddling about with each one, I've discovered that you put the pinheaded hooks through the short tube (the pinhead bit stops them falling out) 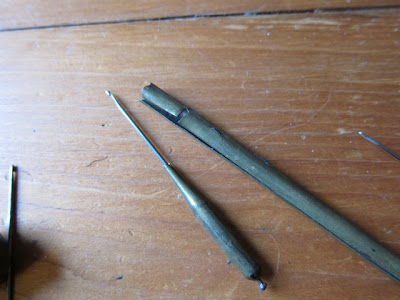 then you put the short tube into the large tube and give it a little turn to lock it into place.
I can only wonder who used these precious items before I found them . We absorbed all the bits and pieces that came from my mother in laws, and her parents' home. These include a basket made from an armadillo, several carpet beaters and a device for making an ice cream sandwich!
I'm so sentimental. I can't bear to throw stuff away. (but I might draw the line at the armadillo. Its got hairs!) 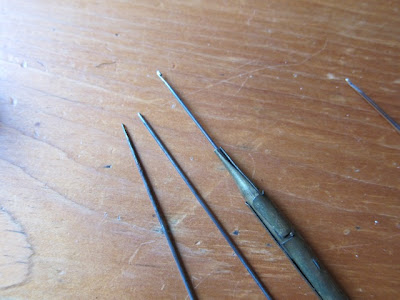 I'm busy collecting my own heirlooms of the future and two more arrived last week.
I was contacted by Al from 'All Tea Towels.' before Christmas asking me to review some tea towels. I said yes then forgot all about it, but have been in touch again and have received two fantastic tea towels of my choice.
And talking of choice..it was really hard to decide. There are so many lovely ones to choose from. Just click the link on the name to go and have a look for yourself.
Nice and big, great quality fabrics and really well printed.
Nice enough to go in frames even!

First I chose this iconic 'Tunnocks teacakes' wrapper design.
I love the graphic and it takes me back. I never liked the things..but I loved squashing all the tops in the packet! 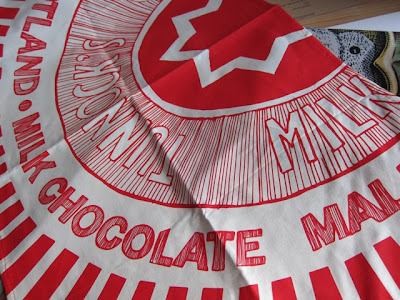 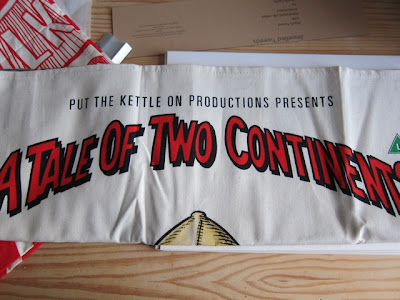 I love 'monkey' and thought it was a bit of fun. 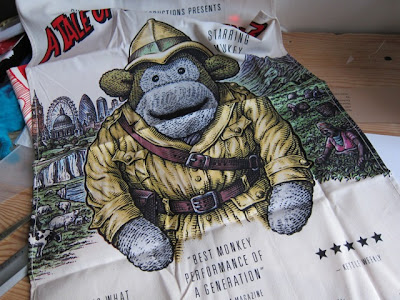 I love his grey face 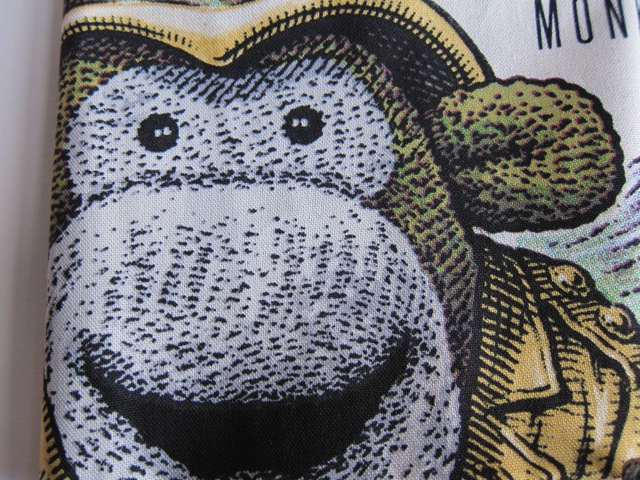 but I wonder if I have been influenced by someone? 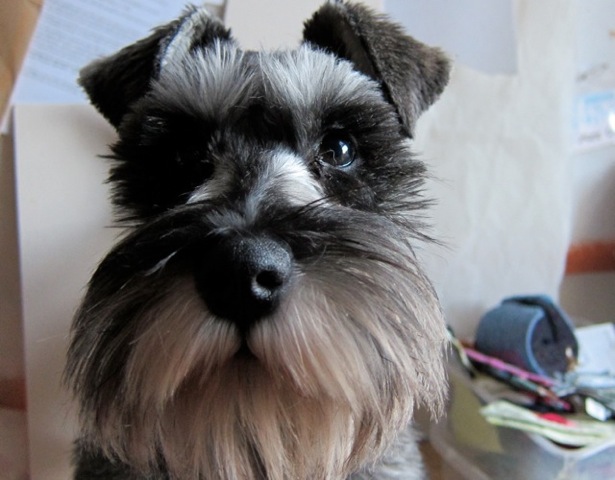 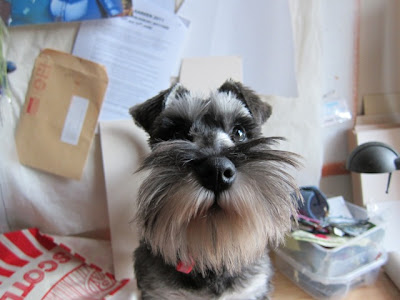 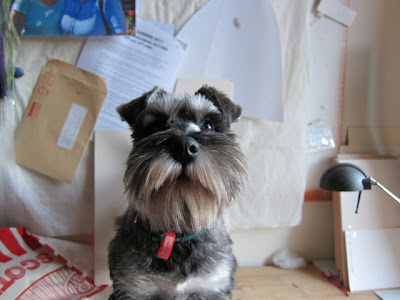 Who was really non-plussed by having to sit on my sewing room table and be photographed in monkey mode. 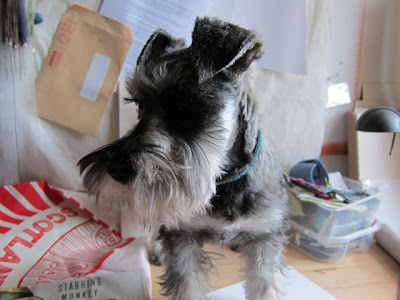 Look at the eyelashes!
Posted by Jackie at 16:36

Oh, Jackie...another lovely post! Thanks for sharing all of your beautiful work, your 'environs', your 'antique roadshow', and your puppy!! XXO-

Your neighborhood is truly breathtaking and the crochet hooks are a great find! But what really drew me into your post is the monkey tea towel. A UK blog friend sent me one of those a year or so ago. I love it and use it all the time!

First... OMGosh, look at that sweet face... Hetty is just adorable! As to the tiny crochet hooks... my Great Grandmother (who did at 32) used tiny hooks like that to produce the most amazingly beautiful lacy edgings. I was blessed to have inherited the majority of them, seems no one else saw their value. Hooks like that can create magic.

Loving the hearts and adoring the crochet hooks. I have some really old ones from my grand mother and they are my treasure! Absolutely loving Hetty!! x

We have an armadillo basket at the museum I work in! I wonder how many more there are?
Love the hearts

Lots of lovely things you've shared with us today. Hetty is just too cute!

LOVE your posts!! I was gonna say the tiny crochet hooks look like those used for tatting lace...Thanks for sharing!

Gorgeous sunset on the way home, and what a lovely find - such delicate work could be done with those crochet hooks!

What a fab post Jacky - the hearts are beautiful and just the thing for Valentine's Day. Your part of the world is so beautiful, and I love your rescued treasures. I have my grandmother's crochet and rug hooks - some so worn now that they wouldn't work, but I still keep them.
The tea towels are fun and that's a wonderful photo of Hetty.

It sounds as though your house is as romantic as mine! I love the hearts, and the tea towels are cute ( I could do with those at the moment). You live in a lovely part of the country, last week you said you envied me living near London, today I'm envious of you and Hetty is as adorable as ever!

Your Hetty is sooo cute!!! OOOHHH by the way thanks for showing us yet more of your lovely hearts.
I too am a collector/hoarder, and have been delving down the box of bits I had from my grandmother this weekend.

what great vintage crochet hooks. such a lovely find.

if I ever get a dog Jackie, it will have to be a Hetty - she is so gorgeous. stunning photos that you took on the way home, that water is so tranquil. I certainly wouldn't be able to part with your crochet hook find - aren't they a treat?! I did my first ever velvet dying today - great fun!

Wonderful brooches. I love old sewing and such tools and always wonder about who used them. The dog is cuter than the monkey but it's close. Pretty area you live in.

Beautiful hearts and photos. Those crochet hooks are fabulous. Well done for getting those tea towels.

Great! Thanks a lot for sharing.

Morecambe Bay....truly home for me...born there and my brother fishes there for his living.

It is so nice to love where you live. It is a beautiful place, your country side. Of course all the better when enjoyed with an adorable Hetty!

I love the brooches, I'm intrigued by the secret project, but most of all I'm bowled over by the magnificence of Hettie's beard!

That purple heart (together with the green ones) looks like an ancient gem to me !
Wow what a beautiful sunset
! Good for the photo, these moments slip away all too soon in real life.
Hetty is looking so cute !!!

oooh boy - wouldn't we all love to have eyelashes like that? I have some of my grandmothers crochet hooks, but nothing as intriguing as those.

that is so funny to see your puppy and the monkey together--there's something about their expression that is a tiny bit similar. Those gorgeous lime and purple hearts are dreamy!

What a truly fun post, Jackie! I loved the drive along the water, and your dog is darling. The velvet hearts steal mine! xxoo, sus

Oh lovely post! Green earts and tea towels and a handsome doggy. A great way to start my day!

really love your red hearts and the green leaves, so detailed!