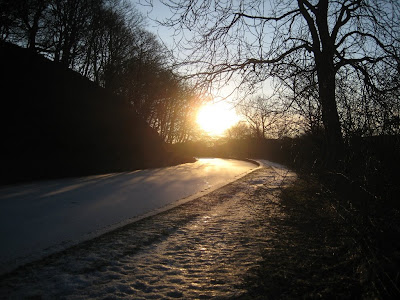 Oh my goodness..I went for a walk today.
Did I say a walk?
I really mean a slide..a totter... a slip.
It seemed like a good idea at the time. My husband went off with a friend to the Irish music session 30 miles away and I went out with his wife.
Up the road then down a public footpath which goes through the grounds of a beautiful house. Well I just hope they weren't in because I was clinging to the ivy just outside their window,grimacing with the effort, then when the ivy ran out I was hanging onto their laurel, then their extremely posh car, and instead of using the correct route we took a shortcut through the shrubbery which was too thick for the snow therefore too thick really for a shortcut.
We attained the canal bridge but had to use our backsides to slip down on to the canal towpath all the time wondering if we would end up in the ice, or under it and clinging to the wall, the stile, the barbed wire, the prickly bushes ...each other..the dog..
Of course all this was accompanied by hysterical laughter...and fear..
There was no going back .
Two hours later we sat and drank tea and congratulated ourselves.
Posted by Jackie at 20:31

Hum. I had promised Edward a walk, but now I'm wondering if I should rethink.

This is precisely why i never stray further that 5ft from the sofa!
Teehee! Thank you for the for the much needed giggle (hope you are both ok though!!)...
x;0)
Have fantabulously productive 2010
missis!
xx

Well done for venturing out, and think of all the extra calories you've burnt off with all that exertion and laughter!

Sounds like a pretty hair-raising 'walk'. And more to come i do believe. Glad you made it safely but I think you deserved something stronger than tea.

Oh my goodness! I cannot emphasize enough how much I identified with your predicament, having been there myself more times than I can count! You attained your goal! Well done!

I'm with mimilove ... we didn't even get any snow but I found the sofa much safer!

I am still laughing Jackie! By the way, I am definitely a twenty-ten girl - we all said nineteen seventy or whatever, none of this long windedness of one thousand nine hundred and seventy! Hope your future walks are a little more uneventful for you. Cheers, Robin

Hah - I am going on one of those walks this morning but at least it is downhill all the way back so I'll be able to slide if nothing else!

I'm pleased you got back safely and could laugh about it because it made me laugh! Sorry!

I can really picture you on your walk Jackie - you are braver than I am in icy conditions - I am staying well and truly put!! Happy New Year - I hope it is good one for you - you do sound to be on much better form now so hope all is going well!
Cheers Ann

lolol!!! Soooo funny Jackie! You put that so well. How wet were those bums after the slide down the banks! :))) Think I'd be into the red......not tea!!! Your posts are always such an enjoyable read. Thank you. x

Actually Jackie I know those people in the posh house and they were pretty annoyed... they did say they had some CCTV coverage and had found incriminating footprints which they had given to the local police, who apparently had a good idea who the culprits were... reoffenders, apparently...

Ha ha ha!! I could see you on that walk, sounded like fun (well, afterwards maybe!!)

LOL! That was the funniest thing I have read in a long long time! Thanks for starting my day off right.

I didn't mean to laugh, really and truly I didn't. However, the mental picture of you both sliding around on your backsides was just too much!

I have a very bad cold and laughing uncontrollably is bad bad bad for the cough. Needless to say, I'm still trying to catch my breath.

And did you feel great when you had that cup of tea in your hand? Happy New Year Jackie.

lovely picture jackie, thanks for the messages,your text went off in my year 8 class they thought it hillarious, well i wasnt going to leave my new phone all alone...

So glad you got to drink your tea I think I may have needed something a little stronger after that!!
P.S Dancing on ice is back soon!

Glad you managed to stay out of the canal ;o) I have been cowering miserably indoors with all this ice and using my cough as an excuse -wimp! Enjoy 2010!

maybe scary for you but very funny pictures for my mind - he he! Glad you got home safe and i bet that tea tasted good!

Nice to hear I'm not the only one who gets into scrapes like that! Glad you made it home in one piece. You raised a laugh here.
Take care!

You do paint a lovely word picture! As I'm just about to set off for 'essential supplies' I'm going to be extra careful ... Nice to talk to you just now.
Take care up in those hills!

That scenario made me laugh, and brings back memories! How much fun and I can hear the hysterical laughter!