.........you lost four pounds each in two weeks and are going away for a few days.
So you're going to be sensible .
You arrive in the city and have to eat in a restaurant so you order the fish.
It has tartare sauce all over it so you won't eat that ..but somehow its gone and the plate is empty.
But you're not having a pudding so when the waitress comes you open your mouth to say 'nothing thank you' but 'whitechocolateandstrawberrycheesecakeplease..' comes out instead.
So you just have to eat it. 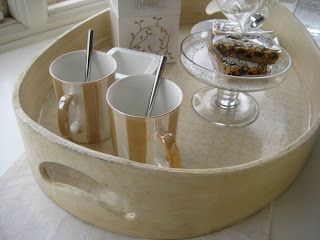 So guess what?
You eat it.
You just have to don't you?
Later you go for a meal in the pub.
Clever you.
You remember from the last visit how enormous the haddock and chips was last time you came here.
So you order the childrens portion.
Feeling very virtuous you enjoy every mouthful and you're not going to have a pudding but then you spot 'pear tartetatin' winking at you from the menu so you have to have at least half of that.

So..next morning you sit at the Awardwinningbreakfast table and order a very small portion of cereal but their small and your small are two different smalls.

You placed your order for smoked salmon and scrambled egg the previous night so you're committed, but you couldn't have know it was four slices of salmon and at least three eggs each could you?
And the toast...the bread for the toast....heavenly brown bread.
Toast.
The best food in all the world.
So you do your best to eat all that and on the whole..you succeed.

So..you make up your mind you absolutely-will-not-have-any-lunch because you want to be ready for the meal you booked for the evening .
Later that day your husband..not you.....no...not you.....wants a coffee and a cake in a cafe.
You definitely don't want a coffee so you have a glass of water, and you don't want cake but you spot a very small quiche and after all its been hours since the scrambled egg and its a long long time till supper so that will just put you on.

You call back into countrylivingland while your husband waits in the car and just look whats on the windowsill!
Glowing from beneath a glass dome.
Two pieces of home-made carrot cake.
So you scoff one quick because that doesn't count, and rush out again.
So now you need a walk.
A long long walk . 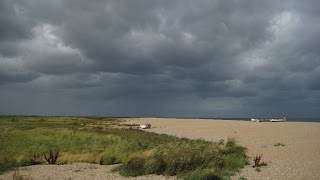 Virtuous again.
And so it goes on.
Just before you go out you order your breakfast for the next day ..a small (underlined) portion of kedgeree,
and set off for the next evening meal, which turns out to be the best meal you've had in a long long time.
No pudding though.
There's the other piece of carrot cake in the room isn't there? And a spare piece of flapjack?
Two cakes. Two people.
So .............

So when you get back home the next day you're a bit worried about the scales.
Because the breakfast kedgeree was delicious, and on the way home you visited Holt and remembered reading about Byfords on someones blog so you just had to have lunch there .....

You are sooo adorable in your approach to life. You offered me help months ago re my "clock" problem and I will miss you more than anyone. I am so pleased to be the first to comment on this one. Do you know why? Because you make me (and hundreds of others) S.M.I.L.E....... :o) X

What she said!! lolol.
and I can so relate to the eating thing. But you know what? Just enjoy everything you can when you can and know that it's really ok! Phew.....bit deep. x

Oh dear. I suppose I'm meant to be terribly sorry for your predicament, but I'm afraid I laughed. Rather a lot, actually.

Gosh. I don't eat and I still can't lose 4 pounds. I think you did good.

I'm laughing because this is me. I do understand your predicament ;-)
But really Jackie you shouldn't even think about cutting down when you are away in a tempting setting .... so you are forgiven!

You did make me laugh! And it proves the point that there's great food for the asking out in the wilds of Norfolk. You should try living here and keeping control of your weight!

Oh Jackie sod the four pounds! You have been to Norfolk, I am jealous... it's one of my fave places... loved your little video of the reeds at ?Cley?Blakeney... it's such a wonderful part of England isn't it. Perhaps it would be better to think in a kind of 'pound-neutral' sort of way - ie you didn't put any on because you'd already lost it. Sounds like you had a tippy top time anyway so that's the main thing. Life's such a bummer a lot of the time that if you can have a lovely time like this it counts for everything.

He, he,he!!Love your story!!I have struggled with weight for so long!!One year to lose 7kilos.I can relate top your story!!

Ha Ha Ha Ha ...Jackie that could have been me writing that post, every day, I say I am going to be goo, I need to shed those holiday pounds (and the other 3 stone I put on when I stopped smoking) and at the end of every day..the cake monster has one or the chocolate or anything else which my bst friend and I call food of the devil...its so hard isnt it and it would be rude, a waste, a shame, a crime or just silly to say no.......

Hmm, life is a dilemma..x

Life's too short... forget the four pounds and eat the food! Hope you enjoyed you stay in East Anglia.

The blog is looking wonderful. I liked it lots before but a new look is sometimes nice. I wish I oould think of what to do for mine... or stop playing on Facebook long enough to do it!
HUGS,
Marilyn

I've lost the same four pounds so many times now, that I have given up. At least you were eating good food and not junk, and appreciating it. Sounds as if you had a great time in spite of that very strong wind. I don't think any part of the country has escaped it.

Ah yes, but as it was all good, wholesome food, that's OK, te he. Am absolutely starving now! BFN. Lesley
PS Should I be worried? MM is talking about missing you?

I've answered my own question Jackie. This really is a calamity - Cathy (Menopausal Musing) has 'bowed out'!

You're allowed on holiday, it's special and it would be rude not to enjoy your hosts efforts wouldn't it? Norfolk is beautiful, such big skies!

If you love food and handmade things then you love life!

walter and me said...

You are very talented. I love your flowers. I'll check out your Etsy shop, as you really do make some delightful items.

Hi! This is Maggik dropping by from County Wicklow. I'm just showing my friend Mags - whose wonderful hospitality I am enjoying at the moment - how to set up a blog. (That's rich, I can hear you saying!) You won't recognise me when I get back because I've been doing Pilates with her. She's the most marvelous teacher and I feel slimmer already. She's so gentle and calm, and you feel sooooooo good, energised and alive afterwards! I've got the DVD now, and I love it!!
I'll tell you all about it when I get home?

I started.... so I'll finish.... I have had so much help thanks to the blogging community..... Thanks for being a new follower(Apparently I can "undelete" the original blog....). Hopefully if I can "sort" Dell, that will happen x

I haven't enjoyed a post that much in quite a while. I'm still laughing. A wonderful story - with a "delcious" ending!

No pain, no gain Jackie. I am guessing that every mouthful of cake and chips hurt like hell. No?

Very funny story !
My sister always says that if you have half a cake, it makes it half fat ,so because it is half fat you can have the other half too LOL!!

you made me hungry now and its not even lunch time .
glad you had a nice time thats the main thing !

Sounds like a lovely get away...just think *thin* and you'll be OK.

Ohhh yum, that food sounds beautiful. I do love trips away like that.

Good luck with the scales.

i am so jealous of your trip to norfolk. it brought back so many memories as i spent a lot of my childhood growing up in Norfolk and especially north norfolk. Holt is wonderful and i think i have been to your cafe. your sentiment re eating are similar to mine. what is the point of visiting lots of lovely places and not eating wonderful food, it is part of the whole experience. you can diet when you get home!

Jackie you've given me the best laugh I've had all week! Talk about takes one to know one - you could have been describing me, we even like the same food!! I chase the same 7 pounds around, losing it before I go away and then joyfully putting it all back on .... and who cares??

I just LOVE your posts they always make me smile. Thanks so much!!

Life is so short and pudding so good!

Thanks for stopping by my blog the other day, and you're right, it is just about impossible to stay on track away from home! I don't think I could skip that flapjack even if you offered to pay me to not stick it in my mouth! I am going river rafting today, is THAT considered EXERCISE?! Ha,ha! Suzie