Last week we had a little visitor. Cheska. Of course, despite the fact that I was the one who welcomed her, introduced her to Hetty, kept the peace, kept the cat away, guess whose knee she preferred? 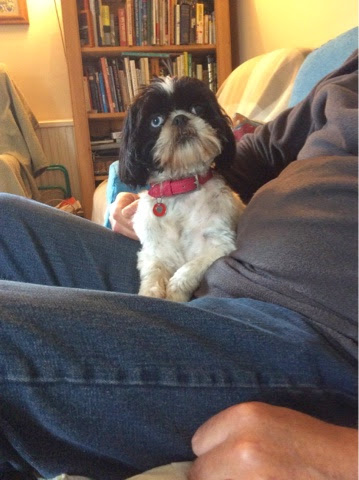 Hetty is not the most gracious hostess, which is a bit worrying as we are having TWO dogs next week! 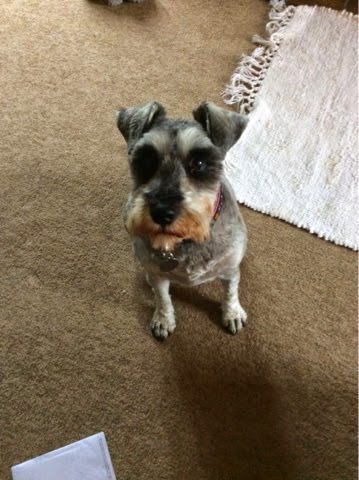 Now the Alice bit. I went to an event in Manchester lit festival. It was held in a building in the University where I was delighted to spot these two wonderful wallhangings. I recognised them instantly as the work of Alice Kettle. I took a couple of pictures. 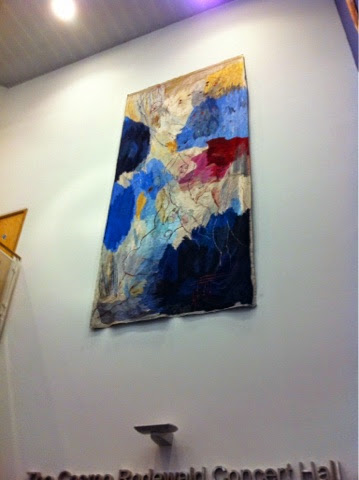 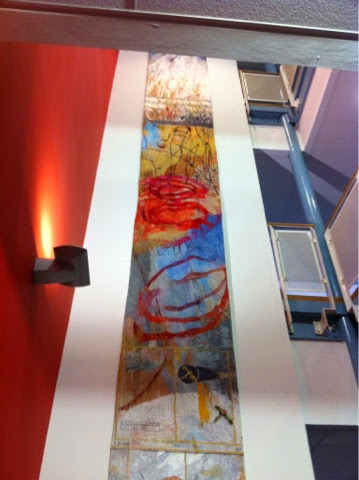 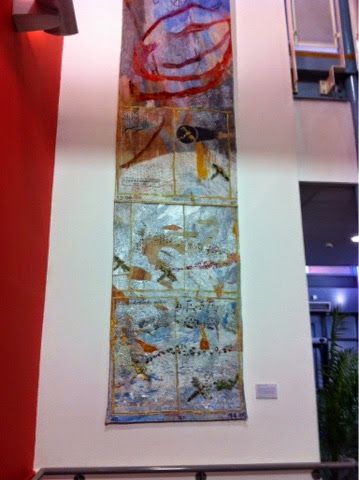 It wasn't until I was on my way out that I saw the photography prohibited notice and the list of dire consequences if caught taking pics, but I think it meant in the auditorium. I did confess but no action was taken.

Anyway. About the auditorium.

Two brilliant Irish authors were in there chatting about their work and reading from their latest books.
I have read three Sebastian Barry books and they always leave me mesmerised by his beautiful prose, so I was really there to hear and see him and he didn't disappoint. I also enjoyed listening to Colm Toibin reading and talking.
The banter between them was very entertaining. 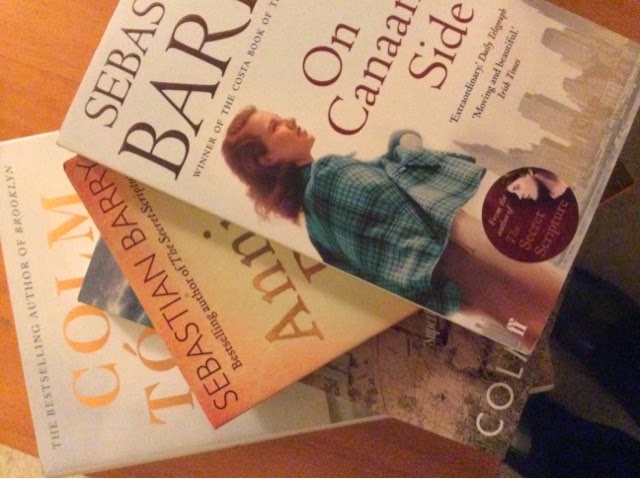 Afterwards there was a signing (after a little buying!) so I am now in possession of signed copies. 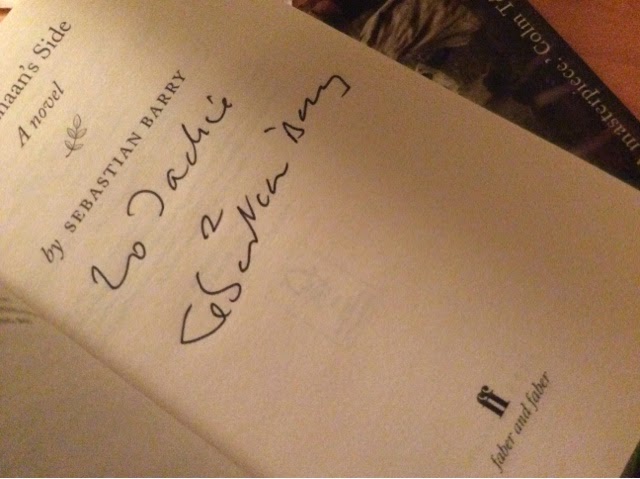 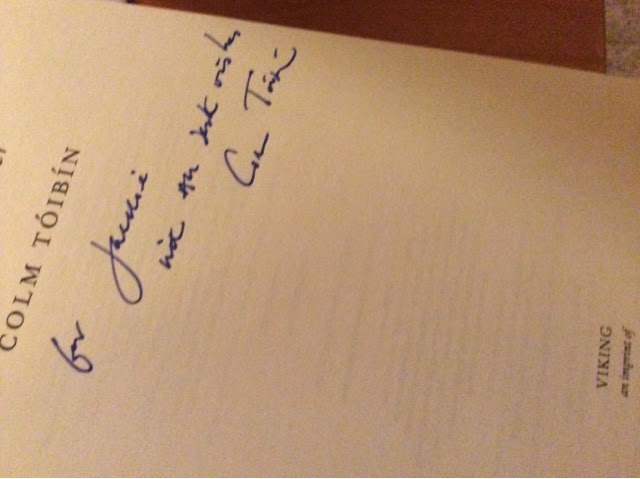 I'm glad I made the effort to get there even though it meant wandering up Oxford Road on my own due to a time miscalculation. I phoned number two son who lives near there and he came and met me halfway and entertained me in his new flat until my dear husband switched his phone on! He'd been to a music class at the Irish centre and my Irish thing finished earlier than his Irish thing.

Thanks everyone for the comments on my last post.
I've had a go at doing some smaller brooches.
First I made some 'silk heavy ' felt, to echo the surface of the old-style brooches I wanted to return to. 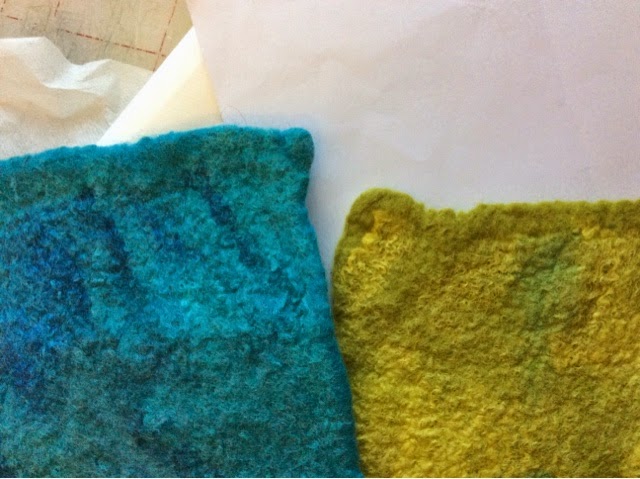 Then I got going and copied one of them which appeared In Quilting Arts magazine a few years ago. 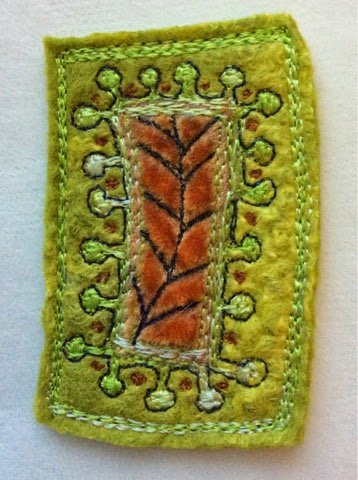 I like how it turned out and had a go and made a few more.
Here they are. About two inches long. Maybe a bit more, but definitely not as big as my usual brooches which are often over three inches. 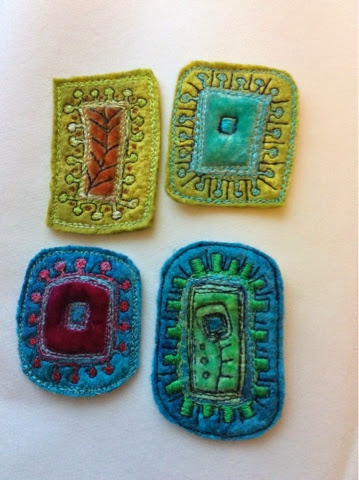 Now I have to see if they sell.

The proof of the pudding etc?
And Elton?
Well.
Last weekend I had a mini reunion with some college friends.
One of these friends has an amazing memory.
I remembered that way back in 1971 I had persuaded the social sec at college to book Elton John for the Saturday night concert/dance. He did, but Elton at that time wasn't a big enough draw, and didn't have enough material for the entire night, so they had to book another band as well.
My friend with the memory says she remembers Elton John sitting all alone in the college refectory and she had to restrain me from going over to sit with him!
Well I never.

Oh my - just think what an early Elton autograph would be worth now!!

I am a double ijit! I swear I didn't push the "Publish button twice!!

Hi Virginia..the brooches are not yet in my shop but I think I'll have to get them in there quick!
Thanks for all you commenst!

Hetty is probably afraid of having to share you with the other dogs.
How nice to meet the authors of your favourite books and have them signed. Love the new brooches and hope they do well for you.

I love the new brooches; enjoyed reading your post.

I'd love the bottom left one but they're not in or sold! Eek!

Never meet up with old schoolfriends - they have such different memories to yours!

The new brooches are stunning!

The brooches are lovely Jackie! Love the silk rich felt you made as the bases, it works really well.
What an Elton memory! Must seam quite surreal with how hugely successful he is now :)
x