'Raincloud hang around' is the title of a new album by Earl Pickens and Family from Lewisburg Pennsylvania. The cover art is by yours truly.
The album isn't released yet but will be soon and I get Royalties!

Earl Pickens (not his real name) contacted me a while ago after browsing etsy for inspiration for his new album cover and liked what I did. 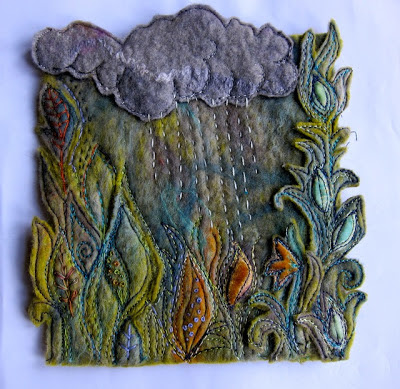 He sent me a little drawing of a raincloud raining on a flower and said 'do your thing.' All he wanted was 'edges.' 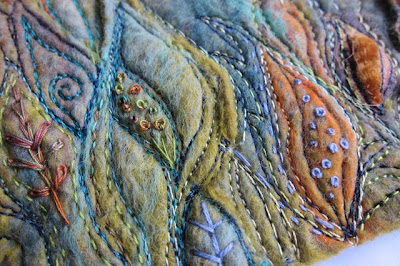 I had so much fun doing this. Its the best kind of commission. Nothing worse than someone commissioning you to do something but being too prescriptive(..or should that be pro scriptive?)thats not going to be your usual style.
He is an absolute star, lovely to deal with. 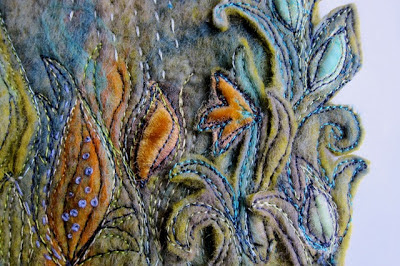 I made a piece of felt with areas of colour, and freely stitched the flowers and leaves as part of the edge. Then I decided it was a bit flat so I cut out the stitched bits and moved it over and attached it again. There were many edges.
I had a lovely piece of grey felt with silk fibres so I stitched a raincloud onto it and attached that. 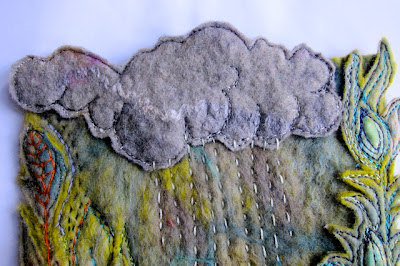 Believe it or not the bit that took the longest time was the rain. I had a few attempts at it before I was satisfied. 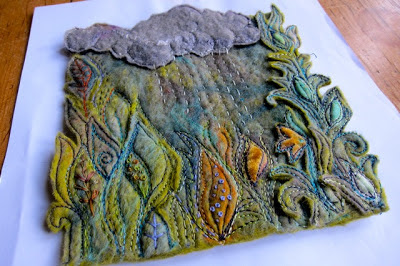 I stitched the words separately and he said he'd superimpose them but in the end he's going to make them the cover of the actual disc. 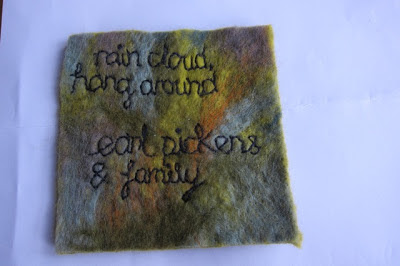 I had a great but sewing time embellishing the flowers with French knots and other bits. 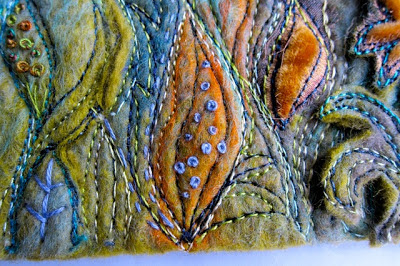 I scanned the artwork to send to him. Its very hard to photograph it. The light tends to bounce back so instead of the rich deep colours it looks pale and blanched.

This is a photograph of it as the actual cover, I didn't take this so I hope he doesn't mind me downloading his photo. 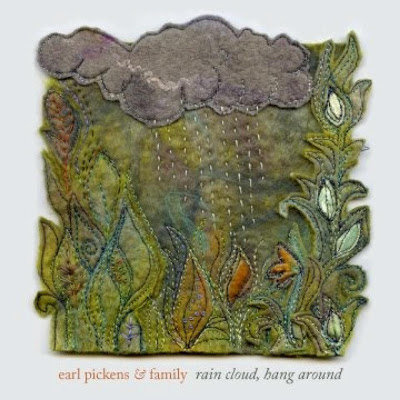 There are no rainclouds hanging around here today so I think I may be outside pulling weeds out.
Posted by Jackie at 11:47

what an exciting commission and such beautiful work, ali

Lovely work, wonderful to see the detail of the textures and stitching. And isn't it great for all of us to see textile art chosen over the usual painting etc. for something like this! Well done Jackie.

what an amazing opportunity! and such a beautiful creation!, I absolutely love it!
(rain) clouds are a constant theme in the background or setting to my drawings/paintings, and I love how you created a 3d effect...
so exciting!

Beautiful! and congratulations on your commission.

Well, I'm very impressed with them for commissioning a piece of modern textile art for such a purpose. The sort of patrons all artists need!

How exciting and what a beautiful piece of work as well as a great plug for textile art. I love it and am sure Earl will too.
Enjoy your weeding - I needed a pneumatic drill to get some of ours out.

Congratulations on the commision. The art work is wonderful.

Wow - how clever - well done you on a brilliant commission. x Jo

Wow! What a wonderful opportunity. It is beautiful! You are a very talented lady.

Jackie, how utterly thrilling. I adore your raincloud designs, the colours are so beautiful. Now I'm off to listen to the music.

Oh and PS,I'm off to get the collaborative pictures framed with some of my birthday money xxxx

How very exciting! A lovely little piece and to think that lots of non textile-y types will get to see it. Just lovely.

I think that is brilliant - you must be very chuffed! How unusual (and discerning) for the artist to choose a piece of textile art for the cover. good on you.

There are a lot of comments here I can't reply to. Thank you for all of them.

Congratulations! And what a beautiful piece of work, stunning.

It's lovely Jackie. What a fun commission!

Well done ,your fame is spreading far and wide!

What a beautiful piece, I love the combination of colours and stitch. It looks so perfect as an album cover. What a great commission.

Beautiful piece - watch out, you could get more commissions ;-)

What a fantastic opportunity and a great piece of work that has come out of it.

How lovely, it must have been a delight to work on such a commission.
Years ago, when I was a textile design student, a male friend had to do a spell in the embroidery department, (he was a graphics student). The work he did was amazing and led directly to a commission in Playboy magazine!

Stunning piece, I love its wintery hues.
Congrats on a wonderful commission :)

Hei Jackie
Ah, those white boxes on the beach are typical for northern Germany.
Actually they were created in Frisia.
They are giant wickerwork armchairs with a small table and usually painted white. You can rent them on the beaches here or buy one for your garden, but they are very expensive.
Have not yet been in the water.
~~~~~~~~~~~~~~~~~~~~~~~~~~~~~~~~~~~
Beatrice

Simply WOW! Such a breathtaking piece and Congratulations!!!!