The Best fun you can have on the kitchen table. 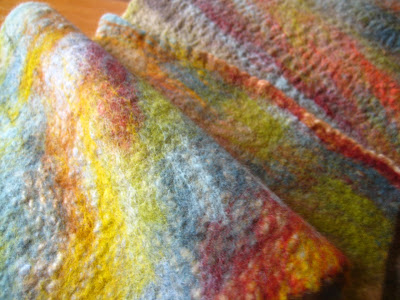 Sorry to disappoint after that title. I thought I'd get a few extra readers by being a bit suggestive.
My ideas of fun may not be the same as others. 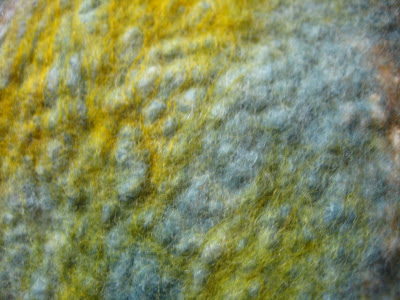 More felt was needed to make more brooches. I'd come to the part of one multicoloured piece where every bit had badly clashing colours and I wanted something different.
I set about it with lots of colours which didn't look promising  until I wet and rolled and rubbed away, and there we go again..little areas that just make me wonder  how felt works its fuzzy magic. 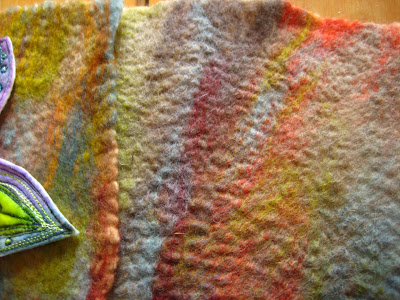 Such fun. But I avoided  pinks and now I need some. Those encroaching leaves tell me I should have added more lilac. 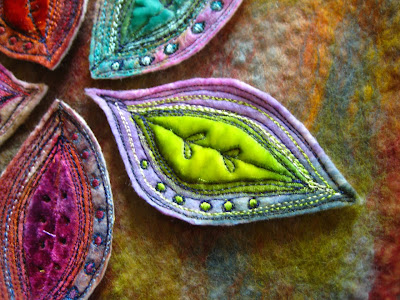 I'll save that for next time.
I'd be doing it right now but I left all my wool in the car boot yesterday and I am just too lazy to go and get them, and its too cold outside. Instead, I'll sew more leaves. 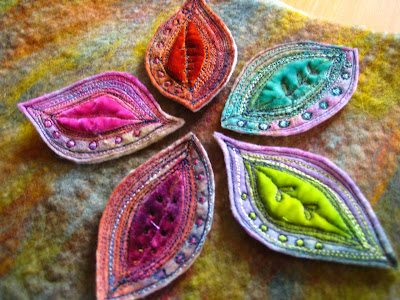 I love doing them and now I have another order, from Dorset this time. (Thanks R) Isn't it exciting?
I haven't heard if I am doing the craft fairs I mentioned yet. I've decided not to do the outside one.
It was the table size that clinched it...I have a 6 foot table and they wanted 5'2". It was the last straw.
I can imagine unloading all my stuff outside at night in December, but not the table as well.

Last Sunday we went for cake in Haworth. Thats the Brontes' Haworth, in case you didn't know. I don't expect Charlotte, Emily and Branwell went to the bottom of the hill for cake, but if 'The Coffee House ' had been there, I'm sure they would have.
It was sunny and the Coffee house was full. We had a bit of time to kill so we browsed the secondhand bookshops and I came across this. 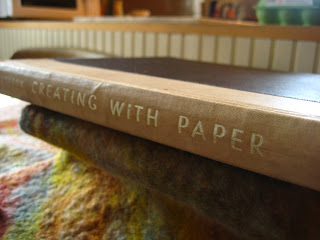 A  super book from 1960.The kind of book I used to borrow from the library in my young days. I 'd spend hours making things like these, 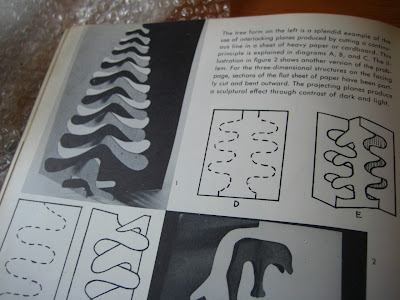 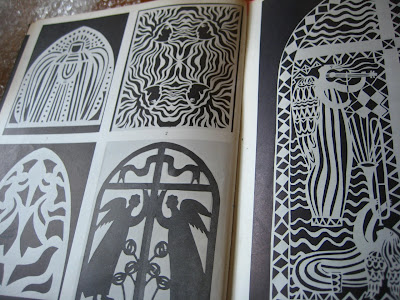 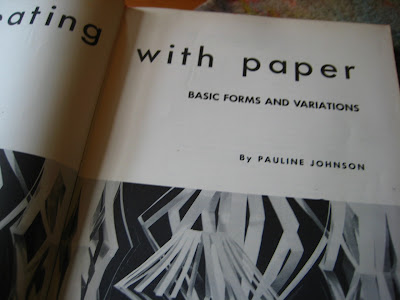 Don't you think the pictures in the book look like the work I make now?
Mid century was a cool time to grow up.
Or seems to be when people who didn't, actually look back at it. 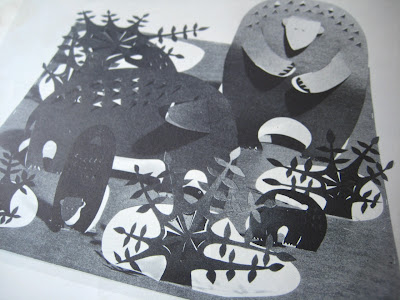 As for me, I have happy memories of childhood but when I think of lying in a very cold bedroom, with ice on the insides of the windows, and my luxurious over-the-bed brown bakelite light switch, hanging from twisted fabric-covered brown flex,and the air too cold to reach up and pull it,  reality strikes and I realise how lucky we are now.
However with projects like these to keep used amused 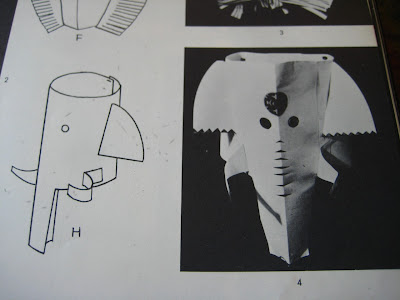 we could tell the younger generation a thing or two about having a good time. 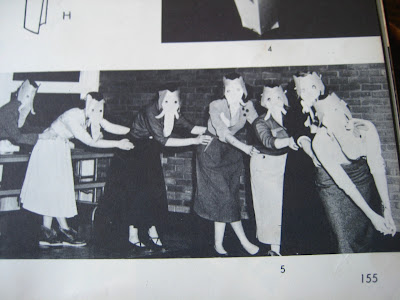 Oh - that felt is just so gorgeous and you will make even more beautiful things with it. What a super book. It just goes to show that if you keep things long enough they stop looking dated and become interesting again. I hardly remember the 60's, not due to a haze of drugs but due to having two more babies in 61 and 64 as well as the two born in 57 and 59. Happy days.

LOL... oh I thought it was going to be about baking :o)

Love the felt and the book! I am so glad that I am not the only one who remembers freezing bedrooms with frost inside etc and wonders why the younger ones seem so hell bent on recreating the 60s!!!

I've inherited some wonderful books that my grandmother bought in the 60s and 70s (I was too young in the 70s to be interested, but I'm making up for it now!)

I love your kitchen table fun! You do such beautiful work and I can certainly see your inspiration coming from those childhood practices of paper cutting art.
Fun what sticks in our heads sometimes. Your cold bedroom made me cringe. Even though I grew up 7generations ago we had good heat.
How fortunate I have been. (and am)
wow.

I want to touch the felt. It looks amazing. I also love your pieces on it. You have been a busy woman.

Sorry I have not commented in a while, I have just been lurking in the background. Congrats too on the orders, Exciting.

boy does your kitchen table see some action!! Love the felt too x

Hey did we live in the same house ...ice on the inside of windows that bakelite switch on twisted brown flex ....yes that was my bedroom ....Love the felt ...and those books i have some like that ....xx

I love the colours you use. Think I might have to treat myself to a brooch one day. That book looks so cool and I can remember parties just like the one in the photograph.

oo the felt looks so lovely and so does you blog!! i like your new look!

Felt looks exquisite as do the leaves! All those yummy colours!

I love those leaves! Will you be putting similar leaves in your etsy store? If not, can I commission a few...I'd love to get a set of three or five so I could wear them together or singly. I just adore your brooches!

Your reminiscences strike a chord.We stayed in one room in front of the fire,no going up to your room unless it was to sleep!
Love the felt.

always so pretty. Molly walked up behind me while I was reading your post and said "those leaves are gorgeous!". So there you go...another fan.

What a great book! I spent a weekend in Haworth once, it was lovely - I remember having the best Yorkshire pudding with gravy in a pub and it (the pudding) was the size of my head! The vicarage was sad and cold though and I felt sorry for the Brontes, though no wonder they wrote such marvellous books in such a melancholy place with nothing else to do!

Beautiful felt and I LOVE that fourth photo down!

Your new felt is wonderful!!
(When are you coming to visit me so we can make some together?!?!?!)
I absolutely adore those books, too. I had a lot of craft books while growing up, as well, and have been on the lookout for a very hippie embroidery book called
'Native Funk and Flash' for several years, now (copies are really expensive!) Check out Knitting Iris' blog post about it here: http://knittingiris.typepad.com/knitting_iris/2008/05/native-funk-and.html
Hugs---

I was expecting something chocolate (for the most fun to be had at table :-) however, very pleased to see more leaves. Your creative leaps always fascinate me.
As for the 50's, I'm so tempted to look back with rosy glasses! However, your reminder about the cold brings me to my senses. I recall the ice on the windows all winter. No one had double insulated windows then. And the shower water could never be hot enough to beat off the chilly air in the bathroom. And of course,, no internet! How quickly that feature of modern life has changed my world, allowing me to get to know wonderful people like you! THAT could never have happened in the 50's.

Oh Jackie I wish you had seen the Su Blackwell, its on till the 28th her paper cutting is beautiful, we are going to go again we loved it so much...I am trying to get my scarves into a shop, things are rather slow with the lady in Ilkley, but my beautician has offered to show a collection at her Christmas promotion evening in November. I will need the pennies after christmas. Hope we can meet soon....love H

First sausage dogs, now this? You are a master.

The colours in these photos are so exquisite - I know I always bang on about them but these are somehow super vibrant and stunning. Very very therapeutic too.

I love that book (same vintage as me!) but don't the papercuts look up to the minute, and the pop-up forest too.

Yes I'm a 1960's fen-land child but still recall the ice on the inside of my bedroom window (beautiful ferny patterns) and the cold lino on my bedroom floor. No shower, just a bath once a week ;-)

More gorgeous felt - will love to see how you use it. Your childhood sounds much like mine - certainly the freezing cold bedroom where I used to swot for exams, together with a flask of hot Ribena!!

Your new project is so beautiful, again:) I love your colours!

Those leaf brooches are even more beautiful than the other brooches you've made. You're soooo good at this sewing malarkey. Gorgeous felt too. :) x

Great memories you brought back! When I grew up my bedroom had no means of heat and there would quite literally be frost on the metal bedposts in the morning. My mother would heat up a big bath sheet beside the fire before I went to bed at night and it would be my bed warmer so I could get to sleep. Oh the jolt of bare feet hitting that cold floor in the morning!! I used to get the hungries after I went to bed and my mother would make me a brown sugar sandwich (no wonder I have a lot of fillings in my teeth!!).

I looked here earlier, but NOT one picture coming trough GRRRRRR ! I was very interested in your felt: I love it. I also wonder how magical feltmaking is : starting of with all the loose fibers ... (careful: don't breathe)and after wetting and rolling and (YES)throwing: ... MAGIC !
That book: we had a similar one here in Holland!
It's still great.