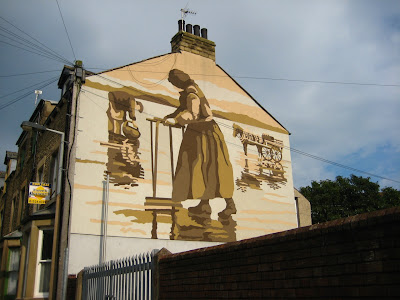 The sun made an appearance last Sunday and we had a trip to the seaside.
Morecambe to be precise. After a really lovely walk along the prom we returned via the residential area and were delighted by some unexpected artworks on the gable ends of some houses. This was a particularly good one showing the cockling heritage.
Thought it might be nice to share.


After 6 months of saying 'I really need to dye some more velvet' I actually got down to it this week. 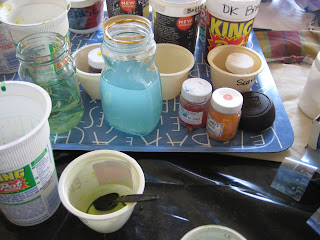 (I must state here that I do not eat pot noodles..those pots are very old and were my sons)
Now I have to confess I really hate it.
Hate doing it.
Perhaps because I'm trying to get a big pile of velvet, (I wonder if the collective noun for velvet is 'pile') dyed and ready to go so, no messing about.
But I get sidetracked and really can't help playing. 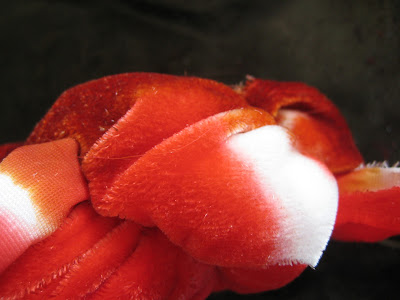 Instead of just dunking it in the dye, I have to go the shibori route..well slightly shibori..I just pull it from corner to corner, twist it and tie it up, 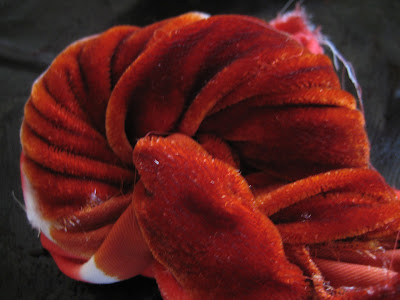 using a syringe to inject the colour.
Its then I go off into a trance watching the colour seep through the pristine white silk velvet and I submit to the joy of dyeing. 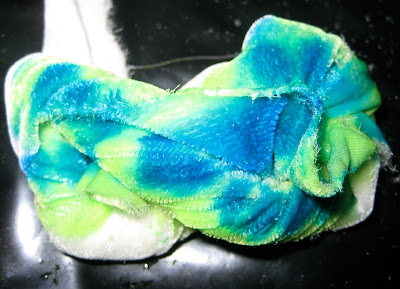 Its amazing that just after I did this I had to nip out and look what was by the car...its a bit hard to see 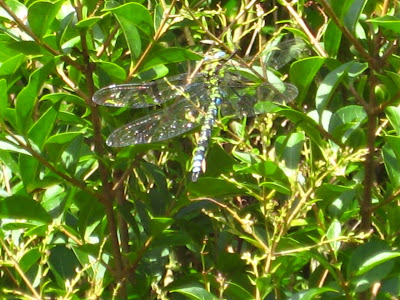 but the colours are stunning and almost the same as the above velvet.
When I get really carried away I have even more fun, injecting the dye and then following it with plain water, so it separates into its constituent parts. Who would think this started life as chocolate brown? 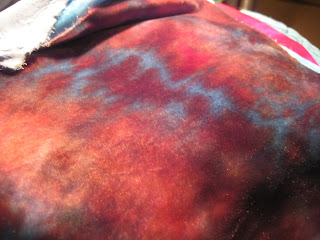 It was hard to concentrate on this dyeing as there was an extremely dangerous activity going on on the stairs.
My Irish Industrial Sewing machine is going for a service. It had taken four of us two years ago, to carry it upstairs and what goes up must come down so we got our sons round. After  sarcastic remarks about me in my rubber gloves and plastic apron like 'Its Gunther Von Jackie', they and my husband summoned all their strength and carried the machine down. I refused to have anything to do with it unless they used ropes but they wouldn't so I turned the radio up very high and got with my dyeing, all the while imagining crushed fingers, hernias, squashed feet and other such horrors.
I needn't have worried and it now stands on its trolley in the hallway looking like some malevolent steampunk barbecue awaiting the man from Stockport to say when he's ready.
I have to say he has no help with lifting there, and has just had a new hip so.....I'll keep you posted.
Back to the dyeing. An overnight stay in bags 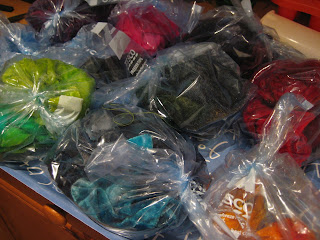 and then the big rinse (oh I feel so criminal using all that water, but I only do it about every two years) 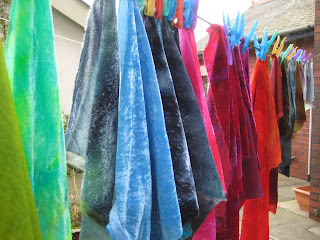 Of course the weather was dull , 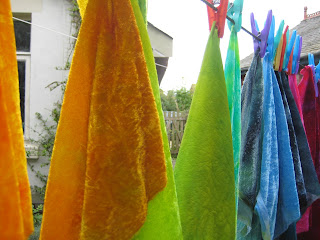 but doesn't it look good on the line.
Then I gave it 10 minutes in the tumble dryer to lift the pile and remove the creases.
But look, I wanted pinky purples.... 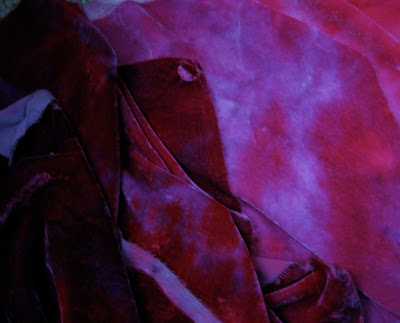 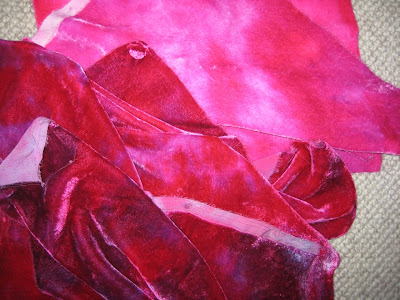 I wanted a new palette. 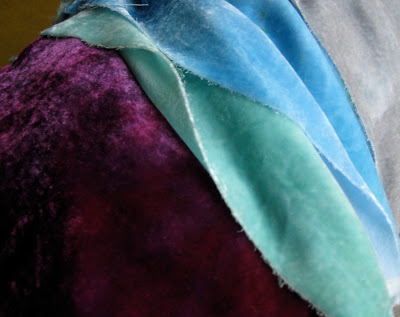 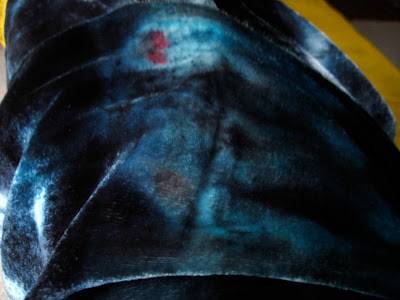 And I've got it.
Then today I went to the felt group and Joan had been on a course with Helen Melville using natural dyes. Click on the link to see how it really should be done. 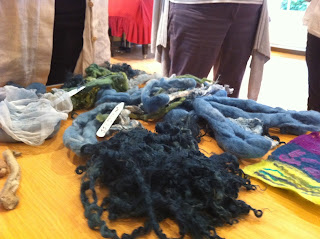 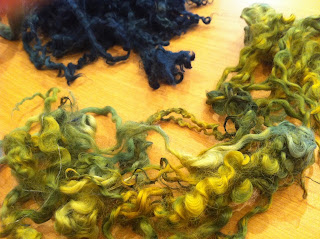 And natural.
Sigh.
And in other news: I've sold both of my pieces of work which were accepted for the West Lancs Open Exhibition. Three and four little felt pieces on white box canvases. You've seen them lots. I'm delighted.
Second: I am filled with gratitude to Ali for the information she gave here.
I have a never ending battle with google reader but if you watch the tutorial she mentions in her blog you can install a little button on your toolbar which just says 'next' and it will take you to the next unread item on your list.
Now if you invest, say, one evening, in catching up completely, then after that, you can click 'next' just a few times and catch up quite cheerfully and quickly.  It really solves the problem and makes blog reading a pleasure again.
There is a lovely sentence at the end that says 'You have reached the end of this internet. Try another?'
Posted by Jackie at 23:02

Gorgeous velvet colours! I live quite near Morecambe and I have never seen that house...will go on the hunt for it next time we're down that way!!

Scrumptious! There is absolutely no possible way I could pick a favourite and I'm not going to try. I love them all.

Amazing to think you can dye enough to keep you going for years in a single weekend! You've got some very lovely colors there!

It is a long time since I've had a mammoth dying session like that (because I don't enjoy it) but it seems worth it for that line of beautiful colours. Congratulations on your sales.

A wonderful post, so informative and you made me smile and laugh out loud! I hate potnoodles too and can understand your not wanting us to think you eat them! Do you use recycled or new velvet? A pile is a great collective noun!
Heather x

Truely yummy colours - can't wait to see what divine creations come from these :-)

I think I am going to take up stealing from washing lines and blame my hormones! :O))))))))

Fab colours! I have caught the dyeing bug also! Where do you get the silk velvet? Is it silk with viscose pile? I have been hunting for it to do exactly what you have done! I have stuck to acid dyes with wool and silk, but I would love to do some cottons and velvet also. I love the richness of velvet....

Fab colours! I have caught the dyeing bug also! Where do you get the silk velvet? Is it silk with viscose pile? I have been hunting for it to do exactly what you have done! I have stuck to acid dyes with wool and silk, but I would love to do some cottons and velvet also. I love the richness of velvet....

Thanks so much for sharing about the google reader next button it is fab!
Heather x

Wonderful colours, both for 'fondling' purposes and 'oggling' The stamps would be a bit '60' style as that was my era, that is until now of course.

Super post Jackie - I love that mural and your velvets are glorious. Well worth all your trouble and effort. You could always offer the machine service man B&B next time, to save getting it down the stairs and into his van and then back again!! Glad there were no injuries. Will you have to bribe your menfolk when the machine comes back?

Jackie you do make me laugh, you have cheered up a dreary morning. I never knew Morecambe had artistic treasure... the things you learn from blogs. Brilliant. x

Thanks for the link about Google reader, I use Bloglines at the moment but it closes down on 1st Oct so need to find some other way of catching up.

Ooh those velvets are such fabulous! I wish I did dyeing - I've done it on workshops but never managed it at home - seems too much effort, but I really should.
And your machine story really made me laugh - can't you get the Stockport man to pay a home visit?

I simply LOVED seeing the process of transformation, and could just imagine you in your rubber gloves!! Beautiful results, but however will you manage without a sewing machine???? Even for one day?

Your washline must have been a sight to behold. Glorious colours!

how beautiful your colours are and the silver dragonfly just topped it - your post is so full of colour I will keep returning to it to get my fix!

I have a dream that I am your next door neighbour and you say, "Come round, help yourself from my washing line anytime"....and back to reality, thanks so much for the next blog info, I love it - but not as much as your velvets !

so just as l was saying to you what beautiful colours, you show us how you do it! thankyou

My eyes nearly popped out when I saw all those colours hung up in a row. Stunning.

Thanks for showing the house painting :) Your dyeing is fabulous, such gorgeous colours. Thank you too for the link to the Google Reader tip. I never knew.... I'm following oodles of blogs and currently have 287 posts on Google Reader! That can't be right! It probably is. I may be some time! ;o)

I don't know what the collective noun for velvet is but I think a 'mellowness' or 'tenderness' of velvet would sound nice.

Gorgeous velvets - er do you leave them out overnight and if so what did you say your address was!!!!!

Hello lovely lovely...I have been wearing your clips and I lovethem, they go with my new Gudrun dress (only £39 they must have made a mistake) Your velvet is edible...yum yum yum...hope you are well...hugs H

Ooh! I love them Jackie. Congratulations on selling your work!

Gorgeous colours and so cheerful on a dull day. Looking forward to seeing what you make with these colourful velvets.

Oooh..I missed this post Jackie! Wish I could have been dyeing with you. After doing a dyeing class recently I am itching to dye some velvet. Need to get on with it and not just think about it. The colors are just stunning and seeing the velvet drying on your clothes line made my mouth water. So much deliciousness in one post.
Dot xx

I love your dyed velvet! Love your whole blog actually...

I'm going to drive round Morecambe now till I find that picture. I've never even seen it.

What a beautiful blog you have! The velvet colors are gorgeous and I love the things you make. Glad I found you!
Enjoy your weekend!
Cariños de Trudis