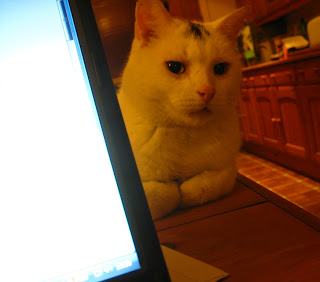 She says she's got nothing to blog about so I'm just dictating a few bits of news.
Well, I've hardly seen her since the last post.
She's been up and down to the post office with those peculiar things she showed .
Only one left now and she won't let me sit on it.
She's been messing about with sparkly fibres for a day teaching, but they both went out for her friends 60th the night before that.
Then she actually managed to get up before I got hungry on Tuesday morning and went off to teach with umpteen bags of lovely comfy looking woolly stuff.
When she came home she didn't even go to sleep like she last time..but got changed and went out with him and his laptop for him to give a talk.

She's spent ages on this thing this week saying she's 'catching up with Google reader, over 700 things'. I say she should reply and leave some more comments but she just buries her head in her hands and says'too many too many'. 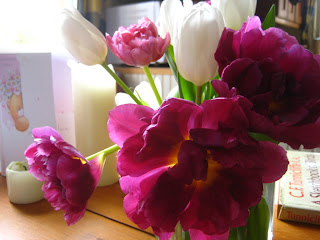 She's running around like I would be if I got the cream (Huh..fat chance) telling every one she's the Wingham Wool Featured artist of the month.

She was jumping up and down on Saturday when she got a note to say she was mentioned...well...her blog was mentioned..or will be..in Maggie Greys article in Workbox .

Well this'll put paid to that when they realise she has to get the cat to write it. 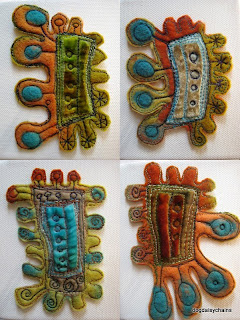 She's going to be busy listing some funny shapes on etsy now.
Posted by Jackie at 19:52

Message to cat: If you're not too busy please tell Jackie well done!

Dear Puss,
Please pass on my congrats to your gopher on the double whammy of becoming Wingham Artist of the Month AND appearing in Maggie Grey's WOW. You must be very proud of her. Oh - and tell her one can never have too many mugs x

First she leaves you to go to Ireland and now she has you writing her blog. What is your machine stitching like, although you will have to resist the urge to sit on the pieces. Great news about Wingham and Workbox . Tell her not to bother with comments - life's too short to spend time playing catch up. Live in the now.

Please could you tell Jackie that I like her shapes in the last post v. much and also the pictures of the lichen in the post before that and the catkins and, well, all of it really

Lovely post Jackie - you'll have to get puss to have his/her own blog!! Congrats on the Workbox mention and for being Wingham Wools artist of the month. The funny shapes are gorgeous and if the cat sits on them it is a sign of their excellence. I used to get a distinction at college every time our cat sat on a piece of my work.

Dear puss, I hope she's paying you ...you'll be answering the phone and signing autographs for her soon....wel done Jackie x

Well, kitty, if there's only one left for you to sit on, perhaps she should just make some more (and include a very special one, just for you). Oh, and please tell your mistress that she has a right to be proud!

Congratulations -especially on the excellence of your cat training! I'm now working closely with my three to see if they'll shape up into a full back up and administration team.

Yay! Congrats Jackie. Told you that you're becoming famous!
Surely by now you must be realising that you are as talented as we think and say you are!! :) x

Excellent, girl!! You are having a great month! I love your cat posts. They make me smile....Sharon

Hey cat, she'll have you strapped to the sewing machine if you don't watch out!

Clever cat - there's a world of knowledge in those eyes! Life seems hectic at the moment Jackie (but in a nice way). Love the tulips, Lesley

Clever cat - there's a world of knowledge in those eyes! Life seems hectic at the moment Jackie (but in a nice way). Love the tulips, Lesley

Hi Puss,
You must be so proud of her. Tell her well done from me.
A x

You've got a very clever cat :)

Hello Cat....sounds like Miss Jackie is *very* busy. Tell her congratulations from me, too. And don't forget to ask for double fish sticks for all your hard work.

I like the cat's style, maybe he'll start a trend :-)
Congrats to your owner, dear cat, on here successes. Lets hope this means you'll get breakfast on time now.

Alfie cat writes...its just the same at our house...marking and coursework everywhere and then I get shouted at when I stand on them with my muddy paws....

Our boss gets in a flap because she does way too much stuff. She should take our advise and chill out!

Love these 'funny shapes' Just take one paw print at a time, eh?

Oh and three cheers for the featured artist (even the amoebae, who live with me, are clapping their little pseudopodia)

That gave us paws for thought..!

Hi Puss, Tell Jackie congratulations on being the Wingham Wools artist of the month, and having her blog mentioned in Maggie Greys article in Workbox!!! Bravo! Tell her to enjoy Ireland - wish I was there with her!

These colours are AMAZING, absolutely love them. A well deserved accolade with the wool artist thing - your work is so original!

Hi Jackie - Hearty congratulations on both achievements - you must be so excited! Love puss's post and those stitched felt pieces - just gorgeous!

Hi Puss, what a clever pet you have, well done!!
At least you get to stay at home cosy, being a dog I am put in the car and trailed up and down the motorway!!!!! When we arrive she is so exhausted it's a quick walk and then she flops down claims she needs a rest, a likely story, not too tired to knit, sock crazy she is and never a couple of pairs for me.
Though i know hard times are coming he is going away for a few months and she is going to be by herself (and she might be moving house whilst he is away, back to Northumberland and those runs on the beach ;-)))
What we cats and dogs have to put up with!!

Jez the black lab (who is rather frightened of cats! )