And a Happy St Patrick's day to the Irish 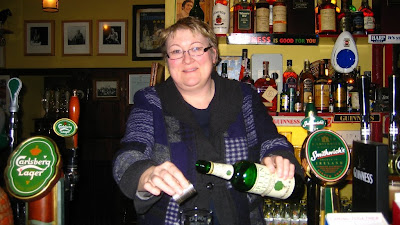 I couldn't leave it without mentioning the other side of the week in Ireland. The 'Craic' I suppose we tourists call it. In this little bar which opened at 9pm each night, I learnt to enjoy Irish Whiskey poured by the amazing Margaret, who by day works at a college miles away and by night serves drinks in the family Whiskey bar, behind which is the family farm where there are a number of cows and a very large bull . When we asked her husband how many, he said 'Four more than last year'. 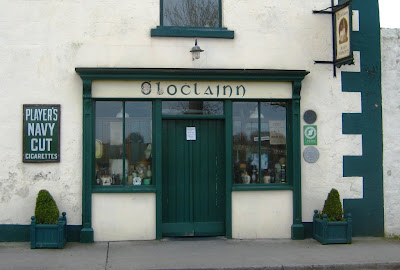 In the picture below are (left) Noel Hill and (right) Seamus Begley, two very revered and skilled exponents of traditional music. I know you can't see them but I promise they were there. Its a tiny bar like someone's front room. On the first night we went in and it was almost empty; on the next night it was shoulder to shoulder with all ages of people; musicians from the concertina course who had come from Russia, Japan, Denmark, Portugal , UK and USA; students from the Burren Art College and some locals. 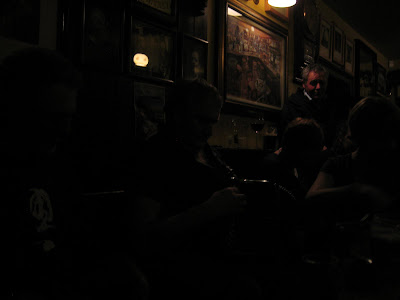 Later in the week, on two separate occasions, we travelled 15 miles across the Burren to Corofin Festival Concert.
Again it was like someone's front room but with a big extension on the back, and in this little community centre where the health and safety and fire escape instructions were rounded off with ' Anyways, best of luck', we heard some amazing playing. 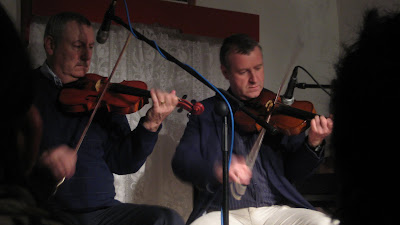 On the Saturday night after the concert we thought we'd go to the pub to hear more but every bar was so packed we could hardly get in.
The wonderful thing was that it encapsulated the whole of society, young and old musicians as well.
So with that and all the natural beauty , no wonder I felt refreshed.
I leave Ireland with these few pictures. 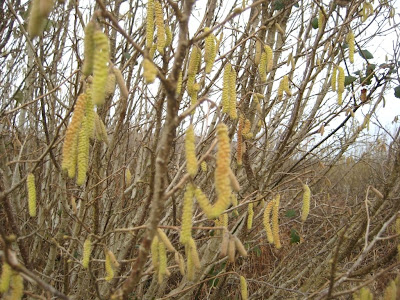 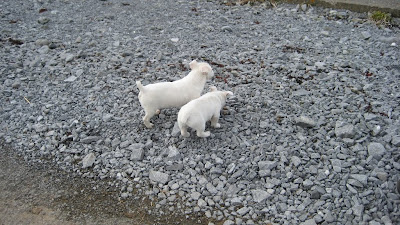 Wild swans on the lake by The Flaggy Shore'

Some amazing lichen in the same area...I zoomed in to view the structure. 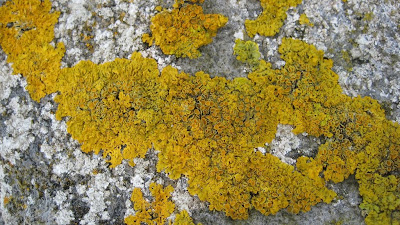 Thank you for reading along with me.
Posted by Jackie at 16:11

No, Thank you, I, for one, thouroughly(word?)your photograghic trip...
I'm so glad you came back refreshed and relaxed..
Take care
x

I like the lichen best - thought I was the only person who enjoyed such strange things, it looks interesting. A lovely post too.

Thanks Jackie for taking me with you. I loved it.

Have enjoyed all your "Irish" posts Jackie. Thanks for the trip!

Aren't the Irish just the best?! What a wonderful time you had and so have we courtesy of your posts. I love the lichen photo too, I have several myself (photos not lichens). You've so many great memories to enjoy. Thank you for taking the time to share them. :o)

I'm surprised after all that 'merriment' that your hands were steady enough to take clear photos! The lichen is great - suitable inspiration for stitching?

a happy st patricks to u.

What a way to end an Irish Holiday....music, laughter and tullamore dew. Happy St Patrick's Day.

Lovely post amazing images. the Craic, you say? Is that what Van Morrison is referring to when he says "and the crack [craic?] was good". i always wondered about that! :)

Great post Jackie. These pubs are what really 'make' Ireland aren't they. We used to go to one in a wee village in Donegal. It opened around 9pm (if the owner felt like it). Nobody used the front door, they let themselves in at a side door that had a yale key in the lock, no door handle. I took my Mum in one evening and she asked for a port. The old man shuffled over and reached behind an original 'Gone With the Wind' poster and pulled out a bottle. He blew the dust off it but my Mum soon forgot about the health and safety issues when she saw the measure he poured her : )We had some great times singing the night away in pubs like these. I went back to that village two years ago after 12 years and the bar men in two of the pubs remembered me! "Ah, it's the Scottish girl that sings" they said.
I'm so glad you had such a great time and heard such great music.

it looks a wonderful place

Oh lucky LUCKY Jackie! You seem to have had a beautiful and memorable trip. I love Irish music, and the evening in the pub you describe sounds like a taste of heaven. Just what we all need!! The lichen picture is especially beautiful, but thank you for sharing so much of this special trip.

Thankyou for sharing your lovely Irish experience with us Jackie. It looks and sounds a beautiful place - full of delights and surprises.

The colour of that lichen is just the most perfect thing! I could look at it for hours.

that heany poem is just soo my favourite and I have tried to learn it but I think my brain is past learning poems now!

I came here from another blog and am so happy I did! Looking for embroidery and I find Ireland - I was in Ireland 3 times between 2000 and 2002. I intend to go back soon for a visit and wanted to tell you your photos are such a nice reminder of fond memories!