Sometimes you just don't get the shape of the day right.
It all went wrong very early.
My husband had been working until midnight on a major report to be e mailed today for a meeting tomorrow.
But the main computer wouldn't 'come on'.
You know these technical problems...the screen was black with white writing with words like bios and cmos and dmi and other stuff with no hint as to whether those are nouns verbs or what. 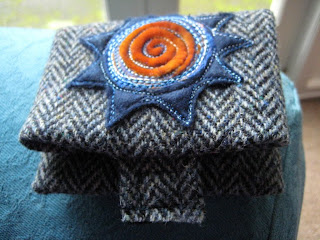 I wrapped parcels to send to Etsy buyers, clicked a few buttons on the main PC and then texted both sons for help.
One phoned and instructed my husband on the correct procedure after of course asking 'have you switched it off and on again' . Der..
No luck, because the phone is downstairs and the PC upstairs and at our age its hard to remember what you went upstairs for let alone instructions for re booting the PC.

I photographed a few brooches in response to a phone call .
My husband rang the news through that the report wouldn't be ready and went off to cut the grass.
Meanwhile I was rooting down the back of the sofa looking for my favourite pen to address the parcels and I found the long lost cordless phone handset and put it on to charge. 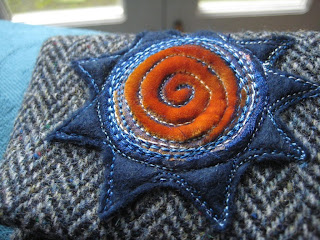 It made all the difference..
So when number one son phoned the instructions I was sitting in front of the PC and could say No when he said' does it say..?'
To cut a long long story short..its fixed.
So you'd think I could get on with some sewing wouldn't you?
No.
I'd tutted and huffed so much about not saving stuff to the external hard drive that then I had to teach himself how to do that.

So anyway...later I made a purse.
It didn't take long because I used a piece I was going to make into a brooch and Harris tweed..
Its just a little one.
Do you think the combination of felt, velvet and Harris tweed works? 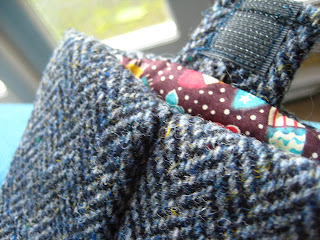 What an odd day.
Weather forecast for tomorrow is on ...and I quote,
'the rough weather is going to be over the Northwest'.
and
'the further South and east we go the warmer it gets'.
Posted by Jackie at 18:21

I love the Harris tweed and the velvet. It is a wonderful combination. You have done it again. Hope tomorrow is less eventful.

The purse is lovely - the computer hassles obviously didn't really put you off your stride!

Dang! Wrong place again! ;-)) If they turned the UK upside down and round would that help? Lol

I know what you mean about computers, always a pain when they play up and I'm always the one who learns how to do things on it and then instructs DH.

The purse is lovely. The fabrics work well together.

Those fabrics are wonderful together and I love the little purse. I have a love/hate relationship with my laptop. At present it wont let me leave a comment on some blogs and I have no idea why. Yesterday I tried to post photographs on mine and it wouldn't oblige. I'll try again tomorrow and it will probably do it with no trouble. How can an inanimate object have a mind of it's own? I mean, it doesn't have a mind!

the little purse is great love the fabric/colour combination

Hello,
I like mixing up fabrics together and the tweed and velvet look fab.x

Quel surprise! Warm weather for the southerners while we tough it out in our cagoules again.

I also suffer from 'what did I come upstairs for?' problems... and as we have four flights of stairs in our house this can be a bit of a nuisance.

At least you don't have three teenagers and a baby in your house... just a little moan there, had to get it in, feel better now :-)

So glad the computer problem was dealt with - I commiserated when you mentioned the black screen and the word 'bios' what a heart sinking feeling those words cause!

Always like your combining of tweed and velvet, lovely. BFN. Lesley

Aren't clever sons wonderful? Having just experienced the dreaded black screen, I can guess how relieved you were to have it back again. Love you little tweedy purse too

I love your shapes. On sunday I went to visit a new town and visit a friend there. I detoured up to a lookout and spent a couple of hours there. I said to my friend " this town has very nice shapes " the blank look.. the wha?

Thats why I locked on to the word shape in this post. Im shaping up sister girl!!!!

I've had enough bios and CMOS to last me a lifetime........ It must be something in the air at the moment! Have also been backing everything onto my new external hard drive...... Just love the Harris Tweed. x

I have sure had a weird day, too. Glad you were still able to stitch up a pretty purse in spite of the earlier cyber hassles. The fabrics look great together. Wonderful work, even under duress! Courage under fire.

I wonder if it's a full moon? That generally causes all sorts of weirdisms. Glad you were able to fix your computer problems AND I love the tweed and the velvet together. Mmmmm....texture!

Yes I love the combination...they were made for one another!

South and East are the only way to go! Pretty purse by the way!

Hi Jackie, your house sounds just like ours - only probably less messy. I'm still putting things back in the right place since the children were here a fortnight ago!
Tweed and velvet is a perfect combination. When I was four I had a new coat to start school. It was tweed with a velvet collar and velvet around the hood. I was so proud when I wore it. I remember it everytime I see your bits and pieces!

tweed and velvet looks great. sympathise with the computer problems

Why is it that th esouth gets all the nice weather. ( geography I guess) Its raining here, the only consolation is that my sister on Skye has it even worse

yeah, and the further south and west you get, the wetter it gets!! (says she from south devon). The tweed and velvet looks great together. How do you get the velvet to stay still - it always 'creeps' when I try to sew it.

Harris Tweed, Velvet and Felt sounds like the most delicious luxurious combintation out there.

What would we do without computer savvy children to help guide us?

Really like the juxtaposition of the soft velvet and rougher tweed!

Hello Flower!
At least you managed to make the beautiful purse and salvage something from the day. I hate days like that when you seem to have spent all the day sitting in front of the computer trying to get it to work properly!

Don't forget about that shop in Lairg. You'd wow them!

computers...agggggh my memory stick has lost all my year 10 GCSE coursework marks......I love this new bag even more than the first one and thank you so much for replacing my poor little heart...love H

A beautiful combination, you always manage to think up amazing goodies, so happy you got the computer fixed too I hate when mine gets a bug, have a great weekend ~ Judy x