The first blue is hardly visible but of you look closely you can just see the backside, legs and tail of this blue tit as it disappears into the nest box for the zillionth time that day. 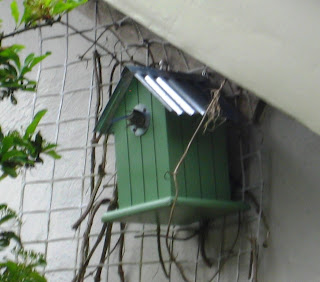 The hole is small so the little legs flail about while it pushes itself in and five minutes later its off leaving the tiniest peeping sounds coming out of the box. Thrilling to have this little drama going on just outside the kitchen window. I wish I could see inside.
The next blue is surprisingly still visible in June. 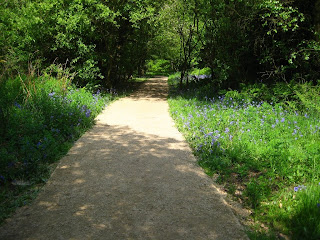 The bluebells haven't been so spectacular this year due to first the cold and then the dry weather. I think the rain usually helps with the lushness.This is yet another new path but I don't find this so offensive as the one in the woods.
This one surrounds the 'Lodge', a body of water in our village used by anglers, and now more accessible to walkers or people who just want a stroll in the sun and not the mud.

The third blue is  mixed with pink.. 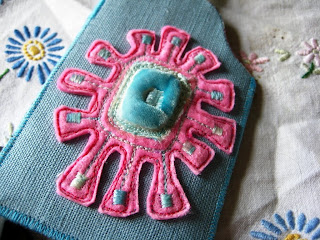 A little phone case made from duck egg blue linen and one of my felt motifs.
I spent the day yesterday developing this. I've made little purses before but people always ask if I have any for an i phone so here it is. 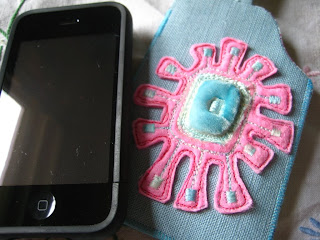 There are lots of things to take into account when you know the value of one of these phones. For their price they are amazingly fragile and vulnerable so I had to think of a way of keeping it in the case, so there's a velcro tab .... 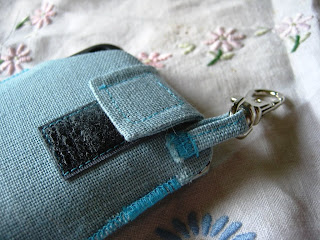 and an easy way of getting it out of the case so there's a cut out corner. 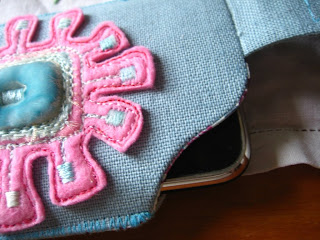 This is my husbands i phone and he has a rubbery sort of cover for his phone so the case will hold it with or without that cover. Without above, and with below and in the closed picture at the top. The velcro tab is adjustable to accommodate the extra thicknes. 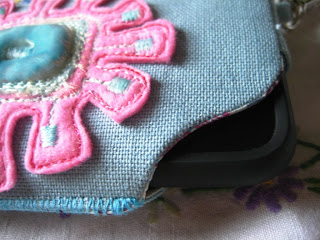 My only reservation is the pink.
But I love the lining. 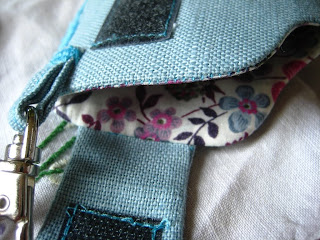 Did I mention the hook too?
Now, obviously my husband won't be using this and he paid a vast amount of money for the rubbery cover, mass-produced of course.
I wonder if anyone will pay a mere £18 for my individualy made, carefully developed and totally unique version?
Well its 'Art and Garden' next weekend so we'll see.
You may want to look at Art and Garden 2008 and 2009 by using the links. I think 2008 gives a better picture.
You may even visit if you live near enough.
I haven't checked the weather forecast for next weekend.
Posted by Jackie at 13:28

As an iphone user I would be more than happy to own one of those...perhaps commission with harris tweed and a lovely piece of liberty that I have been saving...

I think it's a beautiful piece and so beautifully made too! Great colour combo and I love the lining too. I'm sure it will be a hit.

I am sure they will be a great success Jackie, they are so very well thought out.

We had new birdboxes up this year and they were all used, but unfortunately one was in the full sun during that really hot spell and the babies perished. On a normal year there would not have been that level of heat this early and they would have fledged. Needless to say, that particular box has been moved into a much shadier position.

What a beautifully designed cover Jackie! Everything about it just looks right - even the pink!!! I hope it sells really well.

If I were a clean iphone user I would be getting one straight away- it is so lovely and so much nicer than the mass produced rubbish- unfortunately my iphone has a rubber cover as it has to cope with stables and gardens- will you be doing a wipe clean version? The hook bit would be fantastic for me I could dangle it off my belt loop and not have to spend 5 minutes looking for the blasted thing before I set off home. Some days I long for a clean girly life... but then I would miss out on new arrivals like we had on Friday! I can't belive you still have bluebells ours are long gone.
Have a lovely Sunday Jx

I don't even have an iphone and I love it! I am not big on pink generally, but this just looks right... and the other blues are lovely too.

I think it's gorgeous. But my husband is the one with the iPhone, and it might not be his colour.

It's lovely Jackie - and I'm partial to pink. Might just have to get an iphone to justify buying a case xx

I love the "pink and blue" especially the little tail working its way into the bird house! What fun to get to watch that outside your window every day.

Art and Garden? Will you be telling us when and where?

I'd like to buy an iphone just so I can have one of your lovely covers..
I'm sure they'll sell very well
Take care

Love iphones and if I had one I'd opt for your cover anyday! and I love the pink. However I have a telephone box instead! Seriously love your work some of your motifs are similar to mine.I am an artist/antique dealer, originally a Londoner, living in Northern France.
If at a loose end please feel free to pop by my blog. Meanwhile I'll be back soon Thanks x

That case is so well designed, and I do like that baby pink! I am a luddite so use two yoghurt pot and some twine, no cover needed!

I think it is rather lovely and if I had an iphone I would have to have one! The pink looks good.

Hi Jackie
Hope the blue tits thrive! It's amazing to watch how often they are in and out throughout the day, and you have a great view. Interesting on the bluebells, ours are long faded, but I love seeing how far ahead or behind plants are by blog reports.
Love the iphone cover - it looks great!
Dan
-x-

I love your phone cover. I really hope it sells well for you too.
A x

The iphone cover is beautifully designed - I'm sure they will do well for you - you are going to make more?

It's rain :-)
Good idea, I am always loseing the phone.
x x x
It's always deep in my bag under a load of dog biscuits.

The iphone case is so smart and you've thought of everything to make it practical too. Good luck for next weekend - hope the weather is kind. We have had bluetits nesting by the front door and great-tits by the back door. I love hearing the peep-peeps growing stronger each day, till the babies are old enough to leave the nest.

Your iphone holder looks an excellent design, Jackie. We have very busy blackbird parents feeding young in the pyracantha next to my studio. Isn't it wonderful to watch these young birds develop? Magical!

Love the little bird and the description of his/her entry to the box! Today we were at one of the local nurseries and there was a huge robin ruckus going on - seems they had a nest in the open greenhouse and were not happy with people wanting to look at the plants.
I don't have an iphone, but I think you have designed a perfect holder.

The attention to detail and good design is really well done in your phone cover. I too love the lining.

I also enjoyed the whistle stop tour of East Anglia in the previous post. Thank you so much for that, I feel as if we were on the trip together.

Beautiful colours, great fabrics and so well made!

I think your iPhone cover is the nicest, most gorgeous iPhone cover I've ever seen. My brother has a black leather one - men can be so boring, can't they? x

Well I LOVE pink so I would definitely buy this - but sadly no-one has yet responded to mega hints that I want an iphone. Sad isn't it, but I wouldn't be if I had a gorgeous object like this and so beautifully made!!

I love the new case - and everyone needs a little pink in their life. Pink is one of my favorite colors. It's a happy color and it looks great with the blue and the lining ties it all together. Good luck with the upcoming show.

YES, they will pay that for a hand-made cover!